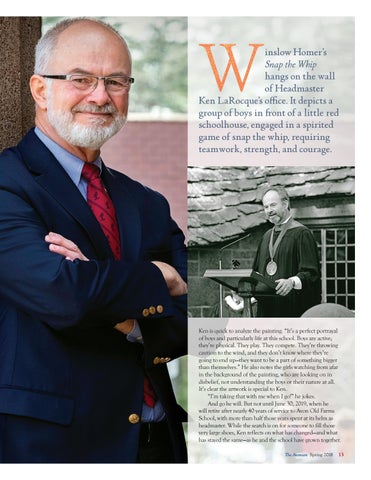 inslow Homer’s Snap the Whip hangs on the wall of Headmaster Ken LaRocque’s office. It depicts a group of boys in front of a little red schoolhouse, engaged in a spirited game of snap the whip, requiring teamwork, strength, and courage.

Ken is quick to analyze the painting. “It’s a perfect portrayal of boys and particularly life at this school. Boys are active; they’re physical. They play. They compete. They’re throwing caution to the wind, and they don’t know where they’re going to end up—they want to be a part of something bigger than themselves.” He also notes the girls watching from afar in the background of the painting, who are looking on in disbelief, not understanding the boys or their nature at all. It’s clear the artwork is special to Ken. “I’m taking that with me when I go!” he jokes. And go he will. But not until June 30, 2019, when he will retire after nearly 40 years of service to Avon Old Farms School, with more than half those years spent at its helm as headmaster. While the search is on for someone to fill those very large shoes, Ken reflects on what has changed—and what has stayed the same—as he and the school have grown together. The Avonian Spring 2018