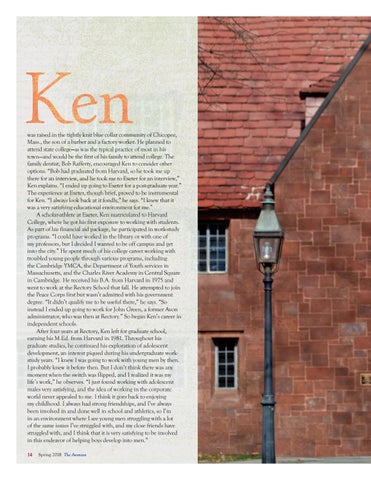 was raised in the tightly knit blue collar community of Chicopee, Mass., the son of a barber and a factory worker. He planned to attend state college—as was the typical practice of most in his town—and would be the first of his family to attend college. The family dentist, Bob Rafferty, encouraged Ken to consider other options. “Bob had graduated from Harvard, so he took me up there for an interview, and he took me to Exeter for an interview,” Ken explains. “I ended up going to Exeter for a post-graduate year.” The experience at Exeter, though brief, proved to be instrumental for Ken. “I always look back at it fondly,” he says. “I knew that it was a very satisfying educational environment for me.” A scholar-athlete at Exeter, Ken matriculated to Harvard College, where he got his first exposure to working with students. As part of his financial aid package, he participated in work-study programs. “I could have worked in the library or with one of my professors, but I decided I wanted to be off campus and get into the city.” He spent much of his college career working with troubled young people through various programs, including the Cambridge YMCA, the Department of Youth services in Massachusetts, and the Charles River Academy in Central Square in Cambridge. He received his B.A. from Harvard in 1975 and went to work at the Rectory School that fall. He attempted to join the Peace Corps first but wasn’t admitted with his government degree. “It didn’t qualify me to be useful there,” he says. “So instead I ended up going to work for John Green, a former Avon administrator, who was then at Rectory.” So began Ken’s career in independent schools. After four years at Rectory, Ken left for graduate school, earning his M.Ed. from Harvard in 1981. Throughout his graduate studies, he continued his exploration of adolescent development, an interest piqued during his undergraduate workstudy years. “I knew I was going to work with young men by then. I probably knew it before then. But I don’t think there was any moment when the switch was flipped, and I realized it was my life’s work,” he observes. “I just found working with adolescent males very satisfying, and the idea of working in the corporate world never appealed to me. I think it goes back to enjoying my childhood. I always had strong friendships, and I’ve always been involved in and done well in school and athletics, so I’m in an environment where I see young men struggling with a lot of the same issues I’ve struggled with, and my close friends have struggled with, and I think that it is very satisfying to be involved in this endeavor of helping boys develop into men.” 14