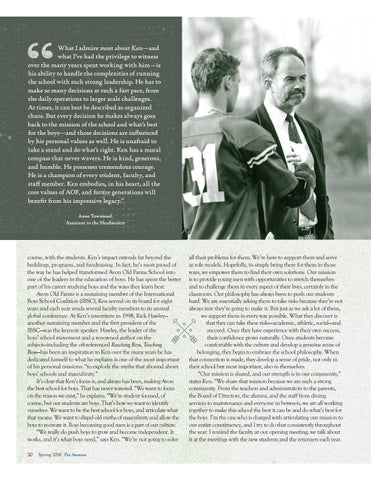 What I admire most about Ken—and what I’ve had the privilege to witness over the many years spent working with him—is his ability to handle the complexities of running the school with such strong leadership. He has to make so many decisions at such a fast pace, from the daily operations to larger scale challenges. At times, it can best be described as organized chaos. But every decision he makes always goes back to the mission of the school and what’s best for the boys—and those decisions are influenced by his personal values as well. He is unafraid to take a stand and do what’s right. Ken has a moral compass that never wavers. He is kind, generous, and humble. He possesses tremendous courage. He is a champion of every student, faculty, and staff member. Ken embodies, in his heart, all the core values of AOF, and future generations will benefit from his impressive legacy.” Anne Townsend, Assistant to the Headmaster

course, with the students. Ken’s impact extends far beyond the buildings, programs, and fundraising. In fact, he’s most proud of the way he has helped transformed Avon Old Farms School into one of the leaders in the education of boys. He has spent the better part of his career studying boys and the ways they learn best. Avon Old Farms is a sustaining member of the International Boys School Coalition (IBSC); Ken served on its board for eight years and each year sends several faculty members to its annual global conference. At Ken’s investiture in 1998, Rick Hawley— another sustaining member and the first president of the IBSC—was the keynote speaker. Hawley, the leader of the boys’ school movement and a renowned author on the subject—including the oft-referenced Reaching Boys, Teaching Boys—has been an inspiration to Ken over the many years he has dedicated himself to what he explains is one of the most important of his personal missions: “to explode the myths that abound about boys’ schools and masculinity.” It’s clear that Ken’s focus is, and always has been, making Avon the best school for boys. That has never wavered. “We want to focus on the reason we exist,” he explains. “We’re student focused, of course, but our students are boys. That’s how we want to identify ourselves. We want to be the best school for boys, and articulate what that means. We want to dispel old myths of masculinity and allow the boys to re-create it. Boys becoming good men is a part of our culture. “We really do push boys to grow and become independent. It works, and it’s what boys need,” says Ken. “We’re not going to solve 20

all their problems for them. We’re here to support them and serve as role models. Hopefully, in simply being there for them in those ways, we empower them to find their own solutions. Our mission is to provide young men with opportunities to stretch themselves and to challenge them in every aspect of their lives, certainly in the classroom. Our philosophy has always been to push our students hard. We are essentially asking them to take risks because they’re not always sure they’re going to make it. But just as we ask a lot of them, we support them in every way possible. What they discover is that they can take these risks—academic, athletic, social—and succeed. Once they have experience with their own success, their confidence grows naturally. Once students become comfortable with the culture and develop a genuine sense of belonging, they begin to embrace the school philosophy. When that connection is made, they develop a sense of pride, not only in their school but most important, also in themselves. “Our mission is shared, and our strength is in our community,” states Ken. “We share that mission because we are such a strong community. From the teachers and administrators to the parents, the Board of Directors, the alumni, and the staff from dining services to maintenance and everyone in between, we are all working together to make this school the best it can be and do what’s best for the boys. I’m the one who is charged with articulating our mission to our entire constituency, and I try to do that consistently throughout the year. I remind the faculty at our opening meeting; we talk about it at the meetings with the new students and the returners each year.