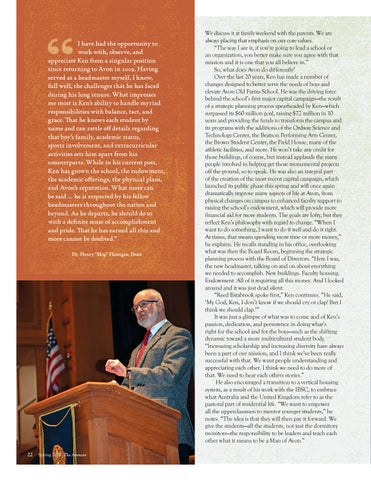 I have had the opportunity to work with, observe, and appreciate Ken from a singular position since returning to Avon in 2009. Having served as a headmaster myself, I know, full well, the challenges that he has faced during his long tenure. What impresses me most is Ken’s ability to handle myriad responsibilities with balance, tact, and grace. That he knows each student by name and can rattle off details regarding that boy’s family, academic status, sports involvement, and extracurricular activities sets him apart from his counterparts. While in his current post, Ken has grown the school, the endowment, the academic offerings, the physical plant, and Avon’s reputation. What more can be said ... he is respected by his fellow headmasters throughout the nation and beyond. As he departs, he should do so with a definite sense of accomplishment and pride. That he has earned all this and more cannot be doubted.” Dr. Henry “Skip” Flanagan, Dean

We discuss it at family weekend with the parents. We are always placing that emphasis on our core values. “The way I see it, if you're going to lead a school or an organization, you better make sure you agree with that mission and it is one that you all believe in.” So, what does Avon do differently? Over the last 20 years, Ken has made a number of changes designed to better serve the needs of boys and elevate Avon Old Farms School. He was the driving force behind the school’s first major capital campaign—the result of a strategic planning process spearheaded by Ken—which surpassed its $60 million goal, raising $72 million in 10 years and providing the funds to transform the campus and its programs with the additions of the Ordway Science and Technology Center, the Beatson Performing Arts Center, the Brown Student Center, the Field House, many of the athletic facilities, and more. He won’t take any credit for those buildings, of course, but instead applauds the many people involved in helping get those monumental projects off the ground, so to speak. He was also an integral part of the creation of the most recent capital campaign, which launched its public phase this spring and will once again dramatically improve many aspects of life at Avon, from physical changes on campus to enhanced faculty support to raising the school’s endowment, which will provide more financial aid for more students. The goals are lofty, but they reflect Ken’s philosophy with regard to change. “When I want to do something, I want to do it well and do it right. At times, that means spending more time or more money,” he explains. He recalls standing in his office, overlooking what was then the Board Room, beginning the strategic planning process with the Board of Directors. “Here I was, the new headmaster, talking on and on about everything we needed to accomplish. New buildings. Faculty housing. Endowment. All of it requiring all this money. And I looked around and it was just dead silent. “Reed Estabrook spoke first,” Ken continues. “He said, ‘My God, Ken, I don’t know if we should cry or clap! But I think we should clap.’” It was just a glimpse of what was to come and of Ken’s passion, dedication, and persistence in doing what’s right for the school and for the boys—such as the shifting dynamic toward a more multicultural student body. “Increasing scholarship and increasing diversity have always been a part of our mission, and I think we’ve been really successful with that. We want people understanding and appreciating each other. I think we need to do more of that. We need to hear each others stories.” He also encouraged a transition to a vertical housing system, as a result of his work with the IBSC, to embrace what Australia and the United Kingdom refer to as the pastoral part of residential life. “We want to empower all the upperclassmen to mentor younger students,” he notes. “The idea is that they will then pay it forward. We give the students—all the students, not just the dormitory monitors—the responsibility to be leaders and teach each other what it means to be a Man of Avon.”