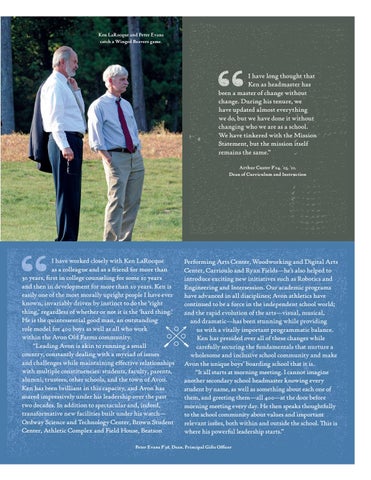 I have long thought that Ken as headmaster has been a master of change without change. During his tenure, we have updated almost everything we do, but we have done it without changing who we are as a school. We have tinkered with the Mission Statement, but the mission itself remains the same.” Arthur Custer P’04, ’05, ’10, Dean of Curriculum and Instruction

I have worked closely with Ken LaRocque as a colleague and as a friend for more than 30 years, first in college counseling for some 10 years and then in development for more than 20 years. Ken is easily one of the most morally upright people I have ever known, invariably driven by instinct to do the ‘right thing,’ regardless of whether or not it is the ‘hard thing.’ He is the quintessential good man, an outstanding role model for 400 boys as well as all who work within the Avon Old Farms community. “Leading Avon is akin to running a small country, constantly dealing with a myriad of issues and challenges while maintaining effective relationships with multiple constituencies: students, faculty, parents, alumni, trustees, other schools, and the town of Avon. Ken has been brilliant in this capacity, and Avon has soared impressively under his leadership over the past two decades. In addition to spectacular and, indeed, transformative new facilities built under his watch— Ordway Science and Technology Center, Brown Student Center, Athletic Complex and Field House, Beatson

Performing Arts Center, Woodworking and Digital Arts Center, Carrioulo and Ryan Fields—he’s also helped to introduce exciting new initiatives such as Robotics and Engineering and Intersession. Our academic programs have advanced in all disciplines; Avon athletics have continued to be a force in the independent school world; and the rapid evolution of the arts—visual, musical, and dramatic—has been stunning while providing us with a vitally important programmatic balance. Ken has presided over all of these changes while carefully securing the fundamentals that nurture a wholesome and inclusive school community and make Avon the unique boys’ boarding school that it is. “It all starts at morning meeting. I cannot imagine another secondary school headmaster knowing every student by name, as well as something about each one of them, and greeting them—all 400—at the door before morning meeting every day. He then speaks thoughtfully to the school community about values and important relevant issues, both within and outside the school. This is where his powerful leadership starts.”