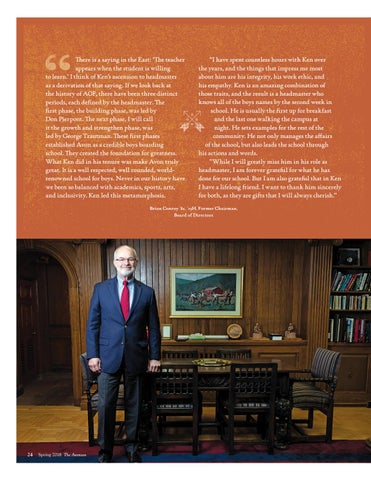 There is a saying in the East: ‘The teacher appears when the student is willing to learn.' I think of Ken’s ascension to headmaster as a derivation of that saying. If we look back at the history of AOF, there have been three distinct periods, each defined by the headmaster. The first phase, the building phase, was led by Don Pierpont. The next phase, I will call it the growth and strengthen phase, was led by George Trautman. These first phases established Avon as a credible boys boarding school. They created the foundation for greatness. What Ken did in his tenure was make Avon truly great. It is a well respected, well rounded, worldrenowned school for boys. Never in our history have we been so balanced with academics, sports, arts, and inclusivity. Ken led this metamorphosis.

"I have spent countless hours with Ken over the years, and the things that impress me most about him are his integrity, his work ethic, and his empathy. Ken is an amazing combination of those traits, and the result is a headmaster who knows all of the boys names by the second week in school. He is usually the first up for breakfast and the last one walking the campus at night. He sets examples for the rest of the community. He not only manages the affairs of the school, but also leads the school through his actions and words. "While I will greatly miss him in his role as headmaster, I am forever grateful for what he has done for our school. But I am also grateful that in Ken I have a lifelong friend. I want to thank him sincerely for both, as they are gifts that I will always cherish.”