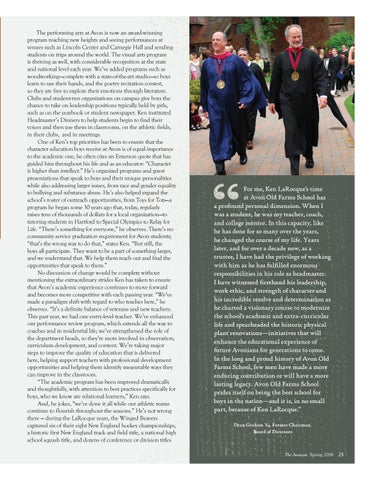 The performing arts at Avon is now an award-winning program reaching new heights and seeing performances at venues such as Lincoln Center and Carnegie Hall and sending students on trips around the world. The visual arts program is thriving as well, with considerable recognition at the state and national level each year. We’ve added programs such as woodworking—complete with a state-of-the-art studio—so boys learn to use their hands, and the poetry recitation contest, so they are free to explore their emotions through literature. Clubs and student-run organizations on campus give boys the chance to take on leadership positions typically held by girls, such as on the yearbook or student newspaper. Ken instituted Headmaster’s Dinners to help students begin to find their voices and then use them in classrooms, on the athletic fields, in their clubs, and in meetings. One of Ken’s top priorities has been to ensure that the character education boys receive at Avon is of equal importance to the academic one; he often cites an Emerson quote that has guided him throughout his life and as an educator: “Character is higher than intellect.” He’s organized programs and guest presentations that speak to boys and their unique personalities while also addressing larger issues, from race and gender equality to bullying and substance abuse. He’s also helped expand the school’s roster of outreach opportunities, from Toys for Tots—a program he began some 30 years ago that, today, regularly raises tens of thousands of dollars for a local organization—to tutoring students in Hartford to Special Olympics to Relay for Life. “There’s something for everyone,” he observes. There’s no community service graduation requirement for Avon students; “that’s the wrong way to do that,” states Ken. “But still, the boys all participate. They want to be a part of something larger, and we understand that. We help them reach out and find the opportunities that speak to them.” No discussion of change would be complete without mentioning the extraordinary strides Ken has taken to ensure that Avon’s academic experience continues to move forward and becomes more competitive with each passing year. “We’ve made a paradigm shift with regard to who teaches here,” he observes. “It’s a definite balance of veterans and new teachers. This past year, we had one entry-level teacher. We’ve enhanced our performance review program, which extends all the way to coaches and in residential life; we’ve strengthened the role of the department heads, so they’re more involved in observation, curriculum development, and content. We’re taking major steps to improve the quality of education that is delivered here, helping support teachers with professional development opportunities and helping them identify measurable ways they can improve in the classroom. “The academic program has been improved dramatically and thoughtfully, with attention to best practices specifically for boys, who we know are relational learners,” Ken says. And, he jokes, “we’ve done it all while our athletic teams continue to flourish throughout the seasons.” He’s not wrong there ­— during the LaRocque years, the Winged Beavers captured six of their eight New England hockey championships, a historic first New England track and field title, a national high school squash title, and dozens of conference or division titles

For me, Ken LaRocque’s time at Avon Old Farms School has a profound personal dimension. When I was a student, he was my teacher, coach, and college mentor. In this capacity, like he has done for so many over the years, he changed the course of my life. Years later, and for over a decade now, as a trustee, I have had the privilege of working with him as he has fulfilled enormous responsibilities in his role as headmaster. I have witnessed firsthand his leadership, work ethic, and strength of character and his incredible resolve and determination as he charted a visionary course to modernize the school’s academic and extra-curricular life and spearheaded the historic physical plant renovations—initiatives that will enhance the educational experience of future Avonians for generations to come. In the long and proud history of Avon Old Farms School, few men have made a more enduring contribution or will have a more lasting legacy. Avon Old Farms School prides itself on being the best school for boys in the nation—and it is, in no small part, because of Ken LaRocque.” Dean Graham '84, Former Chairman, Board of Directors