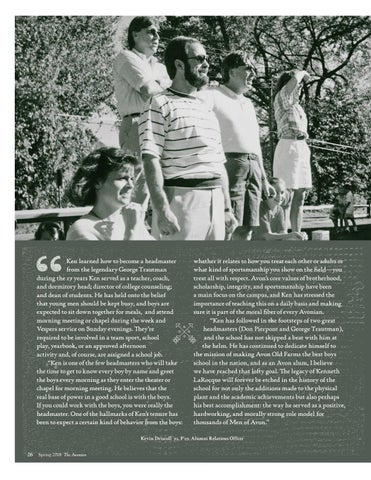 Ken learned how to become a headmaster from the legendary George Trautman during the 17 years Ken served as a teacher, coach, and dormitory head; director of college counseling; and dean of students. He has held onto the belief that young men should be kept busy, and boys are expected to sit down together for meals, and attend morning meeting or chapel during the week and Vespers service on Sunday evenings. They’re required to be involved in a team sport, school play, yearbook, or an approved afternoon activity and, of course, are assigned a school job. “Ken is one of the few headmasters who will take the time to get to know every boy by name and greet the boys every morning as they enter the theater or chapel for morning meeting. He believes that the real base of power in a good school is with the boys. If you could work with the boys, you were really the headmaster. One of the hallmarks of Ken’s tenure has been to expect a certain kind of behavior from the boys:

whether it relates to how you treat each other or adults or what kind of sportsmanship you show on the field—you treat all with respect. Avon’s core values of brotherhood, scholarship, integrity, and sportsmanship have been a main focus on the campus, and Ken has stressed the importance of teaching this on a daily basis and making sure it is part of the moral fiber of every Avonian. “Ken has followed in the footsteps of two great headmasters (Don Pierpont and George Trautman), and the school has not skipped a beat with him at the helm. He has continued to dedicate himself to the mission of making Avon Old Farms the best boys school in the nation, and as an Avon alum, I believe we have reached that lofty goal. The legacy of Kenneth LaRocque will forever be etched in the history of the school for not only the additions made to the physical plant and the academic achievements but also perhaps his best accomplishment: the way he served as a positive, hardworking, and morally strong role model for thousands of Men of Avon.”