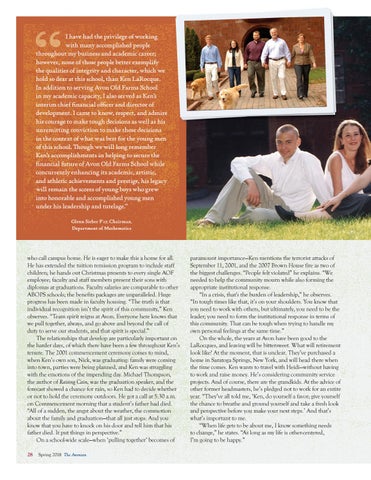 I have had the privilege of working with many accomplished people throughout my business and academic career; however, none of those people better exemplify the qualities of integrity and character, which we hold so dear at this school, than Ken LaRocque. In addition to serving Avon Old Farms School in my academic capacity, I also served as Ken’s interim chief financial officer and director of development. I came to know, respect, and admire his courage to make tough decisions as well as his unremitting conviction to make those decisions in the context of what was best for the young men of this school. Though we will long remember Ken’s accomplishments in helping to secure the financial future of Avon Old Farms School while concurrently enhancing its academic, artistic, and athletic achievements and prestige, his legacy will remain the scores of young boys who grew into honorable and accomplished young men under his leadership and tutelage.” Glenn Sieber P’17, Chairman, Department of Mathematics

who call campus home. He is eager to make this a home for all. He has extended the tuition remission program to include staff children; he hands out Christmas presents to every single AOF employee; faculty and staff members present their sons with diplomas at graduations. Faculty salaries are comparable to other ABOPS schools; the benefits packages are unparalleled. Huge progress has been made in faculty housing. “The truth is that individual recognition isn’t the spirit of this community,” Ken observes. “Team spirit reigns at Avon. Everyone here knows that we pull together, always, and go above and beyond the call of duty to serve our students, and that spirit is special.” The relationships that develop are particularly important on the harder days, of which there have been a few throughout Ken’s tenure. The 2001 commencement ceremony comes to mind, when Ken’s own son, Nick, was graduating: family were coming into town, parties were being planned, and Ken was struggling with the emotions of the impending day. Michael Thompson, the author of Raising Cain, was the graduation speaker, and the forecast showed a chance for rain, so Ken had to decide whether or not to hold the ceremony outdoors. He got a call at 5:30 a.m. on Commencement morning that a student’s father had died. “All of a sudden, the angst about the weather, the commotion about the family and graduation—that all just stops. And you know that you have to knock on his door and tell him that his father died. It put things in perspective.” On a school-wide scale—when ‘pulling together’ becomes of 28

paramount importance—Ken mentions the terrorist attacks of September 11, 2001, and the 2007 Brown House fire as two of the biggest challenges. “People felt violated” he explains. “We needed to help the community mourn while also forming the appropriate institutional response. “In a crisis, that's the burden of leadership,” he observes. “In tough times like that, it’s on your shoulders. You know that you need to work with others, but ultimately, you need to be the leader; you need to form the institutional response in terms of this community. That can be tough when trying to handle my own personal feelings at the same time.” On the whole, the years at Avon have been good to the LaRocques, and leaving will be bittersweet. What will retirement look like? At the moment, that is unclear. They’ve purchased a home in Saratoga Springs, New York, and will head there when the time comes. Ken wants to travel with Heidi—without having to work and raise money. He’s considering community service projects. And of course, there are the grandkids. At the advice of other former headmasters, he’s pledged not to work for an entire year. “They’ve all told me, ‘Ken, do yourself a favor; give yourself the chance to breathe and ground yourself and take a fresh look and perspective before you make your next steps.’ And that’s what’s important to me. “When life gets to be about me, I know something needs to change,” he states. “As long as my life is other-centered, I’m going to be happy.”