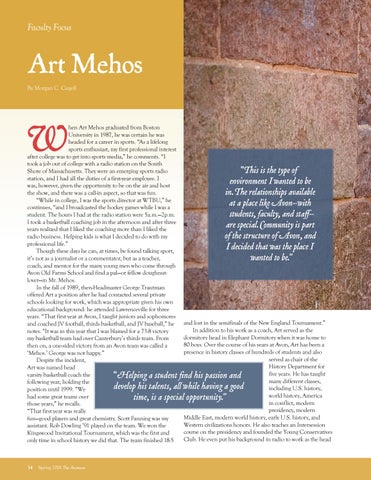 hen Art Mehos graduated from Boston University in 1987, he was certain he was headed for a career in sports. “As a lifelong sports enthusiast, my first professional interest after college was to get into sports media,” he comments. “I took a job out of college with a radio station on the South Shore of Massachusetts. They were an emerging sports radio station, and I had all the duties of a first-year employee. I was, however, given the opportunity to be on the air and host the show, and there was a call-in aspect, so that was fun. “While in college, I was the sports director at WTBU,” he continues, “and I broadcasted the hockey games while I was a student. The hours I had at the radio station were 5a.m.—2p.m. I took a basketball coaching job in the afternoon and after three years realized that I liked the coaching more than I liked the radio business. Helping kids is what I decided to do with my professional life.” Though these days he can, at times, be found talking sport, it’s not as a journalist or a commentator, but as a teacher, coach, and mentor for the many young men who come through Avon Old Farms School and find a pal—or fellow doughnutlover—in Mr. Mehos. In the fall of 1989, then-Headmaster George Trautman offered Art a position after he had contacted several private schools looking for work, which was appropriate given his own educational background: he attended Lawrenceville for three years. “That first year at Avon, I taught juniors and sophomores and coached JV football, thirds basketball, and JV baseball,” he notes. “It was in this year that I was blamed for a 73-8 victory my basketball team had over Canterbury’s thirds team. From then on, a one-sided victory from an Avon team was called a ‘Mehos.’ George was not happy.” Despite the incident, Art was named head varsity basketball coach the following year, holding the position until 1999. “We had some great teams over those years,” he recalls. “That first year was really fun—good players and great chemistry. Scott Fanning was my assistant. Rob Dowling ’91 played on the team. We won the Kingswood Invitational Tournament, which was the first and only time in school history we did that. The team finished 18-5

“This is the type of environment I wanted to be in. The relationships available at a place like Avon—with students, faculty, and staff— are special. Community is part of the structure of Avon, and I decided that was the place I wanted to be.”

and lost in the semifinals of the New England Tournament.” In addition to his work as a coach, Art served as the dormitory head in Elephant Dormitory when it was home to 80 boys. Over the course of his years at Avon, Art has been a presence in history classes of hundreds of students and also served as chair of the History Department for five years. He has taught many different classes, including U.S. history, world history, America in conflict, modern presidency, modern Middle East, modern world history, early U.S. history, and Western civilizations honors. He also teaches an Intersession course on the presidency and founded the Young Conservatives Club. He even put his background in radio to work as the head

“Helping a student find his passion and develop his talents, all while having a good time, is a special opportunity.”