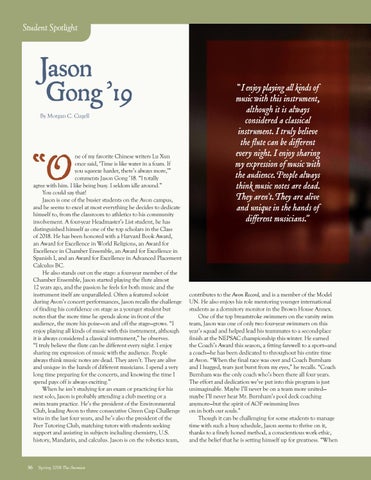 ne of my favorite Chinese writers Lu Xun once said, ‘Time is like water in a foam. If you squeeze harder, there’s always more,’” comments Jason Gong ’18. “I totally agree with him. I like being busy. I seldom idle around.” You could say that! Jason is one of the busier students on the Avon campus, and he seems to excel at most everything he decides to dedicate himself to, from the classroom to athletics to his community involvement. A four-year Headmaster’s List student, he has distinguished himself as one of the top scholars in the Class of 2018. He has been honored with a Harvard Book Award, an Award for Excellence in World Religions, an Award for Excellence in Chamber Ensemble, an Award for Excellence in Spanish I, and an Award for Excellence in Advanced Placement Calculus BC. He also stands out on the stage: a four-year member of the Chamber Ensemble, Jason started playing the flute almost 12 years ago, and the passion he feels for both music and the instrument itself are unparalleled. Often a featured soloist during Avon’s concert performances, Jason recalls the challenge of finding his confidence on stage as a younger student but notes that the more time he spends alone in front of the audience, the more his poise—on and off the stage—grows. “I enjoy playing all kinds of music with this instrument, although it is always considered a classical instrument,” he observes. “I truly believe the flute can be different every night. I enjoy sharing my expression of music with the audience. People always think music notes are dead. They aren’t. They are alive and unique in the hands of different musicians. I spend a very long time preparing for the concerts, and knowing the time I spend pays off is always exciting.” When he isn’t studying for an exam or practicing for his next solo, Jason is probably attending a club meeting or a swim team practice. He’s the president of the Environmental Club, leading Avon to three consecutive Green Cup Challenge wins in the last four years, and he’s also the president of the Peer Tutoring Club, matching tutors with students seeking support and assisting in subjects including chemistry, U.S. history, Mandarin, and calculus. Jason is on the robotics team,

“I enjoy playing all kinds of music with this instrument, although it is always considered a classical instrument. I truly believe the flute can be different every night. I enjoy sharing my expression of music with the audience. People always think music notes are dead. They aren’t. They are alive and unique in the hands of different musicians.”

contributes to the Avon Record, and is a member of the Model UN. He also enjoys his role mentoring younger international students as a dormitory monitor in the Brown House Annex. One of the top breaststroke swimmers on the varsity swim team, Jason was one of only two four-year swimmers on this year’s squad and helped lead his teammates to a second-place finish at the NEPSAC championship this winter. He earned the Coach’s Award this season, a fitting farewell to a sport—and a coach—he has been dedicated to throughout his entire time at Avon. “When the final race was over and Coach Burnham and I hugged, tears just burst from my eyes,” he recalls. “Coach Burnham was the only coach who’s been there all four years. The effort and dedication we’ve put into this program is just unimaginable. Maybe I’ll never be on a team more united— maybe I’ll never hear Mr. Burnham’s pool deck coaching anymore—but the spirit of AOF swimming lives on in both our souls.” Though it can be challenging for some students to manage time with such a busy schedule, Jason seems to thrive on it, thanks to a finely honed method, a conscientious work ethic, and the belief that he is setting himself up for greatness. “When