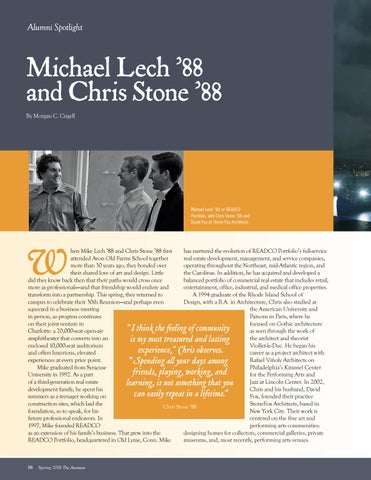 has nurtured the evolution of READCO Portfolio’s full-service hen Mike Lech ’88 and Chris Stone ’88 first real estate development, management, and service companies, attended Avon Old Farms School together operating throughout the Northeast, mid-Atlantic region, and more than 30 years ago, they bonded over the Carolinas. In addition, he has acquired and developed a their shared love of art and design. Little balanced portfolio of commercial real estate that includes retail, did they know back then that their paths would cross once entertainment, office, industrial, and medical office properties. more as professionals—and that friendship would endure and A 1994 graduate of the Rhode Island School of transform into a partnership. This spring, they returned to Design, with a B.A. in Architecture, Chris also studied at campus to celebrate their 30th Reunion—and perhaps even the American University and squeezed in a business meeting Parsons in Paris, where he in person, as progress continues focused on Gothic architecture on their joint venture in as seen through the work of Charlotte: a 20,000-seat open-air the architect and theorist amphitheater that converts into an Viollet-le-Duc. He began his enclosed 10,000-seat auditorium career as a project architect with and offers luxurious, elevated Rafael Viñoly Architects on experiences at every price point. Philadelphia’s Kimmel Center Mike graduated from Syracuse for the Performing Arts and University in 1992. As a part Jazz at Lincoln Center. In 2002, of a third-generation real estate Chris and his husband, David development family, he spent his Fox, founded their practice summers as a teenager working on StoneFox Architects, based in construction sites, which laid the Chris Stone ’88 foundation, so to speak, for his New York City. Their work is future professional endeavors. In centered on the fine art and 1997, Mike founded READCO performing arts communities: as an extension of his family’s business. That grew into the designing homes for collectors, commercial galleries, private READCO Portfolio, headquartered in Old Lyme, Conn. Mike museums, and, most recently, performing arts venues.

“I think the feeling of community is my most treasured and lasting experience,” Chris observes. “Spending all your days among friends, playing, working, and learning, is not something that you can easily repeat in a lifetime.” 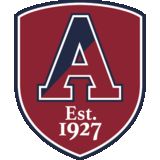