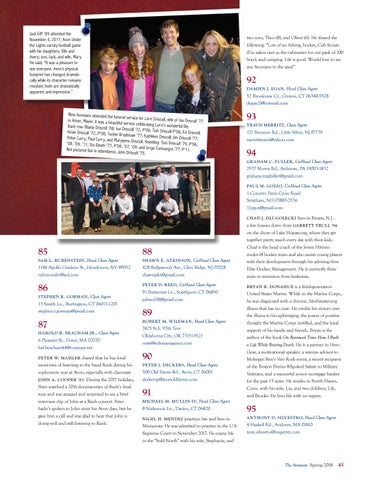 Jack Eiff ’89 attended the November 4, 2017, Avon Under the Lights varsity football game with his daughters, Elle and Avery; son, Jack; and wife, Mary. He said, “It was a pleasure to see everyone. Avon’s physical footprint has changed dramatically while its character remains resolute; both are dramatically apparent and impressive.”

two sons, Theo (8), and Oliver (6). He shared the following: “Lots of ice fishing, hockey, Cub Scouts (I’ve taken over as the cubmaster for our pack of 100 boys), and camping. Life is good. Would love to see any Avonians in the area!”

6 Pleasant St., Dover, MA 02030 hal.beacham44@comcast.net PETER W. M AHLER shared that he has fond memories of listening to the band Rush during his sophomore year at Avon, especially with classmate JOHN A. COOPER ’87. During the 2017 holidays, Peter watched a 2016 documentary of Rush’s final tour and was amazed and surprised to see a brief interview clip of John at a Rush concert. Peter hadn’t spoken to John since his Avon days, but he gave him a call and was glad to hear that John is doing well and still listening to Rush.

Minnesota. He was admitted to practice in the U.S. Supreme Court in November 2017. He enjoys life in the “bold North” with his wife, Stephanie, and

CH AD J. DLUGOLECKI lives in Byram, N.J., a few houses down from GARRETT TRULL ’94 on the shore of Lake Hopatcong, where they get together pretty much every day with their kids. Chad is the head coach of the Jersey Hitmen under-18 hockey team and also assists young players with their development through his advising firm Elite Hockey Management. He is currently three years in remission from leukemia. BRYAN R. DONAHUE is a third-generation United States Marine. While in the Marine Corps, he was diagnosed with a chronic, life-threatening illness that has no cure. He credits his victory over the illness to his upbringing, the power of positive thought the Marine Corps instilled, and the loyal support of his family and friends. Bryan is the author of the book On Borrowed Time: How I Built a Life While Beating Death. He is a partner in Hero Gear, a motivational speaker, a veteran advisor to Mohegan Sun’s Vets Rock event, a recent recipient of the Boston Bruins 8-Spoked Salute to Military Veterans, and a successful senior mortgage banker for the past 15 years. He resides in North Haven, Conn. with his wife, Lia, and two children, Lily, and Brooks. He lives life with no regrets.