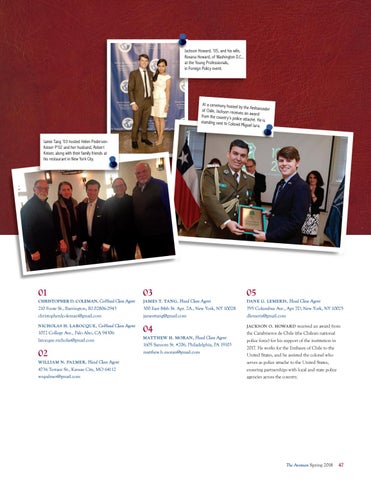 Jackson Howard, ’05, and his wife, Roxana Howard, of Washington D.C., at the Young Professionals, in Foreign Policy event.

At a ceremony hosted by the Ambassador of Chile, Jackson receiv es an award from the countr y’s pol ice attaché. He is standing next to Colone l Miguel Jara.

Jamie Tang ’03 hosted Helen PedersenKeiser P’02 and her husband, Robert Keiser, along with their family friends at his restaurant in New York City.

JACKSON O. HOWARD received an award from the Carabineros de Chile (the Chilean national police force) for his support of the institution in 2017. He works for the Embassy of Chile to the United States, and he assisted the colonel who serves as police attaché to the United States, ensuring partnerships with local and state police agencies across the country.