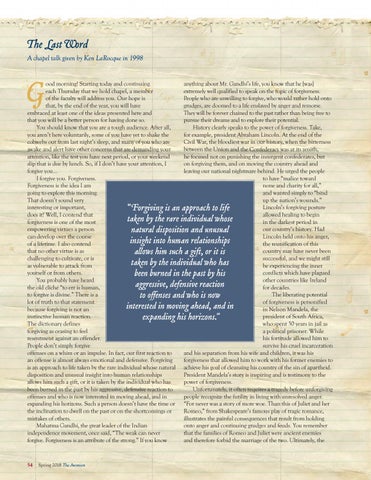 ood morning! Starting today and continuing each Thursday that we hold chapel, a member of the faculty will address you. Our hope is that, by the end of the year, you will have embraced at least one of the ideas presented here and that you will be a better person for having done so. You should know that you are a tough audience. After all, you aren’t here voluntarily, some of you have yet to shake the cobwebs out from last night’s sleep, and many of you who are awake and alert have other concerns that are demanding your attention, like the test you have next period, or your weekend slip that is due by lunch. So, if I don’t have your attention, I forgive you… I forgive you. Forgiveness. Forgiveness is the idea I am going to explore this morning. That doesn’t sound very interesting or important, does it? Well, I contend that forgiveness is one of the most empowering virtues a person can develop over the course of a lifetime. I also contend that no other virtue is as challenging to cultivate, or is as vulnerable to attack from yourself or from others. You probably have heard the old cliché “to err is human, to forgive is divine.” There is a lot of truth to that statement because forgiving is not an instinctive human reaction. The dictionary defines forgiving as ceasing to feel resentment against an offender. People don’t simply forgive offenses on a whim or an impulse. In fact, our first reaction to an offense is almost always emotional and defensive. Forgiving is an approach to life taken by the rare individual whose natural disposition and unusual insight into human relationships allows him such a gift, or it is taken by the individual who has been burned in the past by his aggressive, defensive reaction to offenses and who is now interested in moving ahead, and in expanding his horizons. Such a person doesn’t have the time or the inclination to dwell on the past or on the shortcomings or mistakes of others. Mahatma Gandhi, the great leader of the Indian independence movement, once said, “The weak can never forgive. Forgiveness is an attribute of the strong.” If you know

anything about Mr. Gandhi’s life, you know that he [was] extremely well qualified to speak on the topic of forgiveness. People who are unwilling to forgive, who would rather hold onto grudges, are doomed to a life enslaved by anger and remorse. They will be forever chained to the past rather than being free to pursue their dreams and to explore their potential. History clearly speaks to the power of forgiveness. Take, for example, president Abraham Lincoln. At the end of the Civil War, the bloodiest war in our history, when the bitterness between the Union and the Confederacy was at its zenith, he focused not on punishing the insurgent confederates, but on forgiving them, and on moving the country ahead and leaving our national nightmare behind. He urged the people to have “malice toward none and charity for all,” and wanted simply to “bind up the nation’s wounds.” Lincoln’s forgiving posture allowed healing to begin in the darkest period in our country’s history. Had Lincoln held onto his anger, the reunification of this country may have never been successful, and we might still be experiencing the inner conflicts which have plagued other countries like Ireland for decades. The liberating potential of forgiveness is personified in Nelson Mandela, the president of South Africa, who spent 30 years in jail as a political prisoner. While his fortitude allowed him to survive his cruel incarceration and his separation from his wife and children, it was his forgiveness that allowed him to work with his former enemies to achieve his goal of cleansing his country of the sin of apartheid. President Mandela’s story is inspiring and is testimony to the power of forgiveness. Unfortunately, it often requires a tragedy before unforgiving people recognize the futility in living with unresolved anger. “For never was a story of more woe. Than this of Juliet and her Romeo,” from Shakespeare’s famous play of tragic romance, illustrates the painful consequences that result from holding onto anger and continuing grudges and feuds. You remember that the families of Romeo and Juliet were ancient enemies and therefore forbid the marriage of the two. Ultimately, the

“Forgiving is an approach to life taken by the rare individual whose natural disposition and unusual insight into human relationships allows him such a gift, or it is taken by the individual who has been burned in the past by his aggressive, defensive reaction to offenses and who is now interested in moving ahead, and in expanding his horizons.”