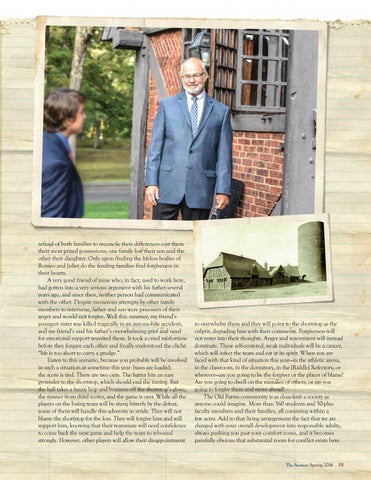 refusal of both families to reconcile their differences cost them their most prized possessions; one family lost their son and the other their daughter. Only upon finding the lifeless bodies of Romeo and Juliet do the feuding families find forgiveness in their hearts. A very good friend of mine who, in fact, used to work here, had gotten into a very serious argument with his father several years ago, and since then, neither person had communicated with the other. Despite numerous attempts by other family members to intervene, father and son were prisoners of their anger and would not forgive. Well this summer, my friend’s youngest sister was killed tragically in an automobile accident, and my friend’s and his father’s overwhelming grief and need for emotional support reunited them. It took a cruel misfortune before they forgave each other and finally understood the cliché “life is too short to carry a grudge.” Listen to this scenario, because you probably will be involved in such a situation at sometime this year: bases are loaded; the score is tied. There are two outs. The batter hits an easy grounder to the shortstop, which should end the inning. But the ball takes a funny hop and bounces off the shortstop’s glove; the runner from third scores, and the game is over. While all the players on the losing team will be stung bitterly by the defeat, some of them will handle this adversity in stride. They will not blame the shortstop for the loss. They will forgive him and will support him, knowing that their teammate will need confidence to come back the next game and help the team to rebound strongly. However, other players will allow their disappointment

to overwhelm them and they will point to the shortstop as the culprit, degrading him with their comments. Forgiveness will not enter into their thoughts. Anger and resentment will instead dominate. These self-centered, weak individuals will be a cancer, which will infect the team and eat at its spirit. When you are faced with that kind of situation this year—in the athletic arena, in the classroom, in the dormitory, in the [Riddle] Refectory, or wherever—are you going to be the forgiver or the placer of blame? Are you going to dwell on the mistakes of others, or are you going to forgive them and move ahead? The Old Farms community is as close-knit a society as anyone could imagine. More than 360 students and 50-plus faculty members and their families, all coexisting within a few acres. Add to that living arrangement the fact that we are charged with your overall development into responsible adults, always pushing you past your comfort zones, and it becomes painfully obvious that substantial room for conflict exists here.