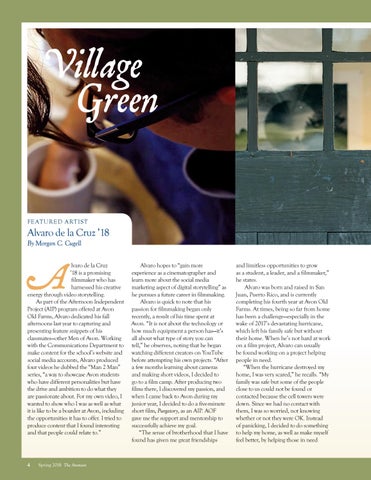 lvaro de la Cruz ’18 is a promising filmmaker who has harnessed his creative energy through video storytelling. As part of the Afternoon Independent Project (AIP) program offered at Avon Old Farms, Alvaro dedicated his fall afternoons last year to capturing and presenting feature snippets of his classmates—other Men of Avon. Working with the Communications Department to make content for the school’s website and social media accounts, Alvaro produced four videos he dubbed the “Man 2 Man” series, “a way to showcase Avon students who have different personalities but have the drive and ambition to do what they are passionate about. For my own video, I wanted to show who I was as well as what it is like to be a boarder at Avon, including the opportunities it has to offer. I tried to produce content that I found interesting and that people could relate to.”

Alvaro hopes to “gain more experience as a cinematographer and learn more about the social media marketing aspect of digital storytelling” as he pursues a future career in filmmaking. Alvaro is quick to note that his passion for filmmaking began only recently, a result of his time spent at Avon. “It is not about the technology or how much equipment a person has—it’s all about what type of story you can tell,” he observes, noting that he began watching different creators on YouTube before attempting his own projects. “After a few months learning about cameras and making short videos, I decided to go to a film camp. After producing two films there, I discovered my passion, and when I came back to Avon during my junior year, I decided to do a five-minute short film, Purgatory, as an AIP. AOF gave me the support and mentorship to successfully achieve my goal. “The sense of brotherhood that I have found has given me great friendships

and limitless opportunities to grow as a student, a leader, and a filmmaker,” he states. Alvaro was born and raised in San Juan, Puerto Rico, and is currently completing his fourth year at Avon Old Farms. At times, being so far from home has been a challenge—especially in the wake of 2017’s devastating hurricane, which left his family safe but without their home. When he’s not hard at work on a film project, Alvaro can usually be found working on a project helping people in need. “When the hurricane destroyed my home, I was very scared,” he recalls. “My family was safe but some of the people close to us could not be found or contacted because the cell towers were down. Since we had no contact with them, I was so worried, not knowing whether or not they were OK. Instead of panicking, I decided to do something to help my home, as well as make myself feel better, by helping those in need