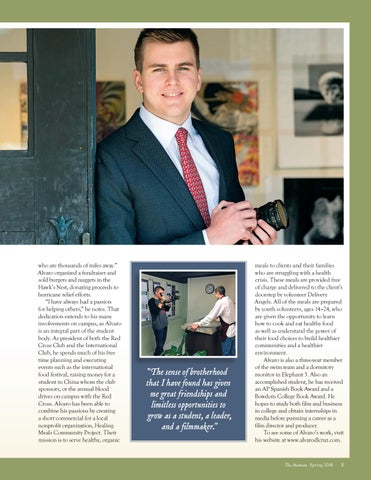 who are thousands of miles away.” Alvaro organized a fundraiser and sold burgers and nuggets in the Hawk’s Nest, donating proceeds to hurricane relief efforts. “I have always had a passion for helping others,” he notes. That dedication extends to his many involvements on campus, as Alvaro is an integral part of the student body. As president of both the Red Cross Club and the International Club, he spends much of his free time planning and executing events such as the international food festival, raising money for a student in China whom the club sponsors, or the annual blood drives on campus with the Red Cross. Alvaro has been able to combine his passions by creating a short commercial for a local nonprofit organization, Healing Meals Community Project. Their mission is to serve healthy, organic

“The sense of brotherhood that I have found has given me great friendships and limitless opportunities to grow as a student, a leader, and a filmmaker.”

meals to clients and their families who are struggling with a health crisis. These meals are provided free of charge and delivered to the client’s doorstep by volunteer Delivery Angels. All of the meals are prepared by youth volunteers, ages 14–24, who are given the opportunity to learn how to cook and eat healthy food as well as understand the power of their food choices to build healthier communities and a healthier environment. Alvaro is also a three-year member of the swim team and a dormitory monitor in Elephant 3. Also an accomplished student, he has received an AP Spanish Book Award and a Bowdoin College Book Award. He hopes to study both film and business in college and obtain internships in media before pursuing a career as a film director and producer. To see some of Alvaro’s work, visit his website at www.alvarodlcruz.com.