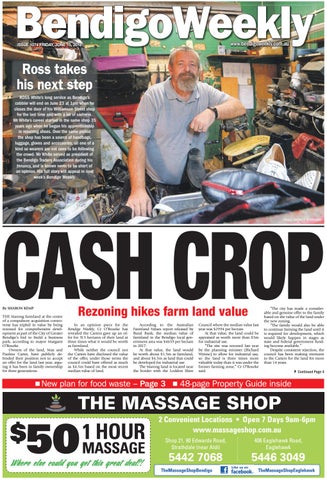 Ross takes his next step ROSS White’s long service as Bendigo’s cobbler will end on June 23 at 1pm when he closes the door of his Williamson Street shop for the last time and with a lot of sadness. Mr White’s career started in the same shop 35 years ago when he began his apprenticeship in repairing shoes. Over the same period the shop has been a source of handbags, luggage, gloves and accessories, all one of a kind so wearers are not seen to be following the crowd. Mr White served as president of the Bendigo Traders Association during his tenancy, and is known never to be short of an opinion. His full story will appear in next week’s Bendigo Weekly.

THE Marong farmland at the centre of a compulsory acquisition controversy has tripled in value by being rezoned for comprehensive development as part of the City of Greater Bendigo’s bid to build a business park, according to mayor Margaret O’Rourke. Owners of the land, Max and Pauline Carter, have publicly defended their position not to accept an offer for the land last year, arguing it has been in family ownership for three generations.

In an opinion piece for the Bendigo Weekly, Cr O’Rourke has revealed the Carters gave up an offer for 313 hectares of their land at three times what it would be worth as farmland. While neither the council nor the Carters have disclosed the value of the offer, under those terms the council could have offered as much as $4.5m based on the most recent median value of land.

According to the Australian Farmland Values report released by Rural Bank, the median value of farmland in the Bendigo local government area was $4659 per hectare in 2017. At that value, the land would be worth about $1.5m as farmland, and about $4.5m as land that could be developed for industrial use. The Marong land is located near the border with the Loddon Shire

Council where the median value last year was $2994 per hectare. At that value, the land could be appraised as worth more than $3m for industrial use. “The site was rezoned last year by the planning minister (Richard Wynne) to allow for industrial use, so the land is three times more valuable today than it was under the former farming zone,” Cr O’Rourke said.

“The city has made a considerable and genuine offer to the family based on the value of the land under the new zoning. “The family would also be able to continue farming the land until it is required for development, which would likely happen in stages as state and federal government funding become available.” Despite consistent rejection, the council has been making overtures to the Carters for the land for more than 14 years.

Where else could you get this great deal?!