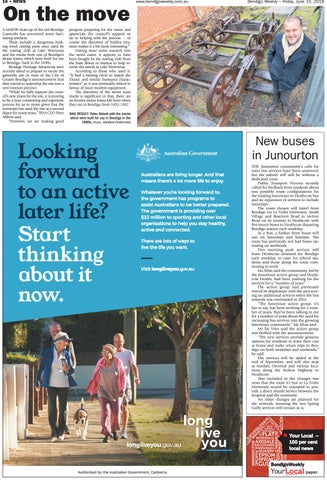 A MAJOR clean-up of the old Bendigo Gasworks has uncovered some fascinating artefacts. These include a dangerous looking weed cutting punt once used by the rowing club at Lake Weeroona and the trucks from one of Bendigo’s steam trams, which were built for use in Bendigo, back in the 1890s. Bendigo Heritage Attractions were recently asked to prepare to vacate the gasworks site in view of the City of Greater Bendigo’s announcement that they intend to redevelop the site into a new tourism precinct. “While we fully support the council’s new plans for the site, it is proving to be a time consuming and expensive process for us to move given that the tramways has used the site as a second depot for many years,” BHA CEO Peter Abbott said. “However, we are making good

progress preparing for the move and appreciate the council’s support so far in helping with the process … of course the discovery of hidden treasures makes it a bit more interesting.” Having done some research into the weed cutter, it appears to have been bought by the rowing club from the State Rivers in Murtoa to help remove the weeds in Lake Weeroona. According to those who used it: “It had a turning circle to match the Titanic and similar buoyancy characteristics” so it was eventually retired in favour of more modern equipment. The discovery of the steam tram trucks is significant in that, there are no known steam trams left from when they ran in Bendigo from 1892-1902. RAIL RESULT: Peter Abbott with the trucks which were built for use in Bendigo in the 1890s. Photo: ANDREW PERRYMAN

Looking forward to an active later life? Start thinking about it now.

New buses in Junourton Australians are living longer. And that means there’s a lot more life to enjoy. Whatever you’re looking forward to, the government has programs to assist Australians to be better prepared. The government is providing over $22 million to sporting and other local organisations to help you stay healthy, active and connected. There are lots of ways to live the life you want.

THE Junourton community’s calls for extra bus services have been answered, but the suburb will still be without a dedicated route. Public Transport Victoria recently called for feedback from residents about two possible route configurations for the existing Junortoun to Heathcote bus and an expansion of services to include Saturdays. The route chosen will travel from Bendigo via La Trobe University, Strath Village and Reservoir Road to McIvor Road on its journey to Heathcote with five return buses to Heathcote departing Bendigo station each weekday. In a first, a further three buses will run on Saturdays and Sundays. The route has previously not had buses operating on weekends. Two morning peak services will leave Heathcote destined for Bendigo each weekday, to cater for school students and those along the route commuting to work. Ms Allan said the community, led by the Junortoun action group and Heathcote Health, had been pushing for the services for a “number of years”. The action group had previously voiced its displeasure with the area scoring no additional services when the bus network was overhauled in 2016. “The Junortoun action group, it’s fair to say, has been working for a number of years, they’ve been talking to me for a number of years about the need for increasing bus services into the growing Junortoun community,” Ms Allan said. Mr De Vries said the action group was thrilled with the announcement. “The new services provide genuine options for residents to leave their cars at home and make return trips to Bendigo on both weekdays and weekends,” he said. The services will be added at the end of September, and will also stop at Axedale, Derrinal and various locations along the McIvor Highway to Heathcote. Also included in the changes was news that the route 63 bus to La Trobe University would be extended to provide a direct shuttle service between the hospital and the university. No other changes are planned for the network, meaning the two Spring Gully services will remain as is.