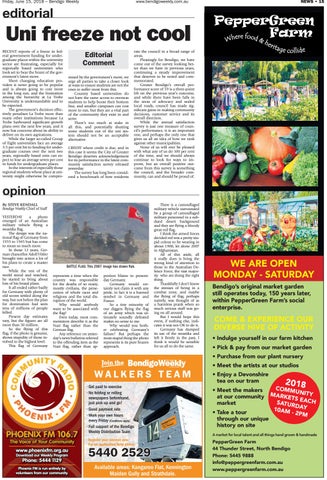 Recent reports of a freeze in federal government funding for undergraduate places within the university sector are frustrating, especially for regionally based universities who look set to bear the brunt of the government’s latest move. Short changing education providers is never going to be popular and is always going to cost more in the long run, and the frustration among the hierarchy at La Trobe University is understandable and to be expected. The government’s decision effectively penalises La Trobe more than many other institutions because La Trobe harboured significant growth plans over the next few years, and it now has concerns about its ability to deliver on its own aspirations. While the larger so-called Group of Eight universities face an average 3.5 per cent hit to funding for undergraduate courses over the next two years, regionally based unis can expect to lose an average seven per cent in funds for undergraduate places. In the interests of especially those regional students whose place at university might otherwise be compro-

Editorial Comment mised by the government’s move, we urge all parties to take a closer look at ways to ensure students are not the ones to suffer most from this. Country based universities do not have the same access to overseas students to help boost their bottom line, and smaller campuses can cost more to run, but they are a vital part of the community they exist in and serve. There’s too much at stake in all this, and potentially shutting some students out of the uni system should not be an acceptable alternative. CREDIT where credit is due, and in this case it seems the City of Greater Bendigo deserves acknowledgement for its performance in the latest community satisfaction survey released yesterday. The survey has long been considered a benchmark of how residents

rate the council in a broad range of areas. Pleasingly for Bendigo, we have come out of the survey looking better than we have in previous years, continuing a steady improvement that deserves to be noted and commemorated. Greater Bendigo’s overall performance score of 59 is a three-point lift on the previous year’s outcome, and while there have been falls in the areas of advocacy and sealed local roads, council has made significant gains in making community decisions, customer service and its overall direction. While the annual satisfaction survey is just one measure of council’s performance, it is an important one, and perhaps the only one that gives us all an idea of how we rank against other municipalities. None of us will ever be pleased with what any of us do 100 per cent of the time, and we should always continue to look for ways to improve, but an overall positive outcome from this survey is something the council, and the broader community, can and should be proud of.

opinion By STEVE KENDALL Bendigo Weekly Chief of Staff YESTERDAY a photo emerged of an Australian military vehicle flying a swastika flag. The design was the national flag of Germany from 1933 to 1945 but has come to mean so much more. In those 12 years, German chancellor Adolf Hitler brought into action a lot of his plans to create a master race. While the rest of the world stood and watched, he started to bring about lots of his brutal plans. It all ended rather badly for Germany with plenty of old scores settled along the way, but not before the plan for domination had seen tens of millions of people killed. Present day estimates vary, but the figures are all more than 50 million. So the flying of this flag, if the photo is genuine, shows stupidity of those involved to the highest level. This flag of Germany

battle flag: This 2007 image has drawn flak. represents a time when the country was responsible for the deaths of so many, mostly civilians, the persecution of whole races and religions and the total disruption of the world. Why would anybody want to be associated with the flag? Even today, most commentators describe it as the Nazi flag rather than the German flag. Any reference on yesterday’s news bulletins referred to the offending item as the Nazi flag, rather than ap-

portion blame to presentday Germany. Germany would certainly not claim it with any pride, in fact it is a banned symbol in Germany and France. So a tiny minority of our diggers flying the flag of an army which was ultimately soundly defeated makes no sense to me. Why would you bother celebrating Germany’s failure? But perhaps the most stupid thing the photo represents is its pure brazen approach.

There is a camouflaged military vehicle surrounded by a group of camouflaged military personnel in a subdued desert background and they are flying a bloody great red flag. I think the armed forces decided red was a pretty stupid colour to be wearing in about 1900, let alone 2007 in Afghanistan. All of this aside, all it really does is bring the wrong kind of attention to those in the Australian Defence Force, the vast majority who are doing the right thing. Thankfully I don’t know the stresses of being in a combat zone, and maybe the flying of flag, perhaps naively, was thought of as a harmless prank when so much serious stuff was going on all around. But I would hope this event, if nothing else, indicates it was not OK to do it. Germany has dumped its use of the swastika and left it firmly in the past, I think it would be sensible for us all to do the same.

PHOENIX FM 106.7 The Voice of Your Community www.phoenixfm.org.au Download our Weekly Program

Phoenix FM is run entirely by volunteers from our community.

• Get paid to exercise • No folding or rolling newspapers beforehand, just pick up and go! • Good payment rate • Work your own hours every Friday (Conditions apply) • Full support of the Bendigo Weekly Distribution Team Register your interest now. For an application form phone:

WE ARE OPEN MONDAY - SATURDAY

• Take a tour through our unique history on site

A market for local talent and all things hand grown & handmade