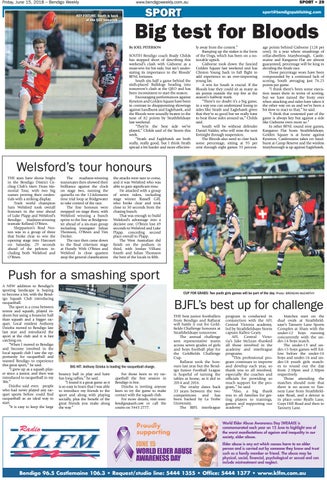 KEY FIXTURE: South is back at the QEO tomorrow.

SOUTH Bendigo coach Brady Childs has stopped short of describing this weekend’s clash with Gisborne as a must-win for his side, but isn’t understating its importance to the Bloods’ BFNL fortunes. South sits half a game behind the sixth-placed Bulldogs heading into tomorrow’s clash at the QEO and has been inconsistent to start the season. Encouraging performances against Kyneton and Golden Square have been in contrast to disappointing showings against Sandhurst and Eaglehawk, and the Bloods were soundly beaten to the tune of 82 points by Strathfieldsaye last weekend. “They’re the best side we’ve played,” Childs said of the Storm this week. “Strath and Eaglehawk are both really, really good, but I think Strath spread a bit harder and more effective-

ly away from the contest.” Ramping up the stakes is the form of the Dogs, which has been on a noticeable uptick. Gisborne took down the fancied Golden Square last weekend and has Clinton Young back in full flight to add experience to an ever-improving young list. A win for South is crucial. If the Bloods lose they could sit as many as six points outside the top five at the season’s halfway mark. “There’s no doubt it’s a big game, in a way you can understand losing to sides like Strath and Eaglehawk given that they’re so good but we really have to beat those sides around us,” Childs said. South will be without defender Daniel Nalder, who will miss the next fortnight through suspension. The Bloods also need to claw back some percentage, sitting at 95 per cent through eight games 33 percent-

age points behind Gisborne (128 per cent). In a year where smashings of cellar-dwellers Maryborough, Castlemaine and Kangaroo Flat are almost guaranteed, percentage will be king in deciding the finals race. Those percentage woes have been compounded by a continued lack of scoring, South averaging just 76.25 points per game. “I think there’s been some execution issues there in terms of scoring, but we have turned the footy over when attacking and sides have taken it the other way on us and we’ve been a bit slow to react to that,” he said. “I think that contested part of the game is always key but against a side like Gisborne even more so.” In other BFNL round nine games, Kangaroo Flat hosts Strathfieldsaye, Golden Square is at home against Kyneton, Castlemaine takes on Sandhurst at Camp Reserve and the winless Maryborough is up against Eaglehawk.

Welsford’s tour honours THE stars have shone bright in the Bendigo District Cycling Club’s Merv Dean Memorial Tour, with two big names proving their credentials with a striking display. Track world champion Sam Welsford took overall honours in the tour ahead of Luke Plapp and Welsford’s Bendigo Madison-winning teamate Kelland O’Brien. Shepparton’s Brad Norton was in a group of three that broke clear to win the opening stage into Harcourt on Saturday, 29 seconds ahead of the peloton including both Welsford and O’Brien.

The madison-winning teammates then showed their brilliance against the clock on stage two, running the quinella on the 12-kilometre time trial loop at Bridgewater to take control of the race. The line honours were swapped on stage three, with Welsford winning a bunch sprint to the line at Bridgewater ahead of a six-man group including youngster Julian Thomson, O’Brien and Tim Decker. The race then came down to the final criterium stage at Huntly. With O’Brien and Welsford in close quarters atop the general classification

the attacks were sure to come, and it was Welsford who was able to gain significant time. He attacked with a group of seven riders, including stage winner Russell Gill, who broke clear and took close to 50 seconds from the chasing bunch. That was enough to build Welsford’s advantage into a decisive one. O’Brien lost 49 seconds to Welsford and Luke Plapp, conceding second place overall to Plapp. The West Australian did finish on the podium in third, with Jordan Villiani fourth and Julian Thomson the best of the locals in fifth.

Push for a smashing sport A NEW addition to Bendigo’s sporting landscape is hoping to become a hit, with the Bendigo Squash Club introducing racquetball. The sport is a cross between tennis and squash, played indoors but using a bouncier ball than squash and a bigger racquet. Local resident Anthony Dzioba moved to Bendigo late last year and introduced the sport at the club and it is fast catching on. “When I moved to Bendigo and become involved in the local squash club l saw the opportunity for racquetball and wanted Bendigo to experience this great sport,” he said. “I grew up as a squash player since a junior, and then was introduced to racquetball in my 30s.” Dzioba said even people who had never played any racquet sports before could find racquetball as an ideal way to start. “It is easy to keep the large

CUP FOR GRABS: Two youth girls games will be part of the day. Photo: BRENDAN McCARTHY

BJFL’s best up for challenge

BIG HIT: Anthony Dzioba is leading the racquetball charge. bouncy ball in play and have fun long rallies,” he said. “I found it a great game as it is so easy to learn that I was able to introduce my friends to the sport and along with playing socially, plus the benefit of the great friends you make along the way.”

For those keen to try racquetball the first session in Bendigo is free. Dzioba is inviting anyone keen to try the game to make contact with the squash club. For more details, visit www. bendigosquash.com or call the courts on 5443 2777.

THE best junior footballers from Bendigo and Ballarat will battle it out for Goldfields Challenge honours at Strathfieldsaye tomorrow. The annual challenge sees representative teams across seven grades of girls and boys football play for the Goldfields Challenge Cup. Ballarat took the honours last year but the Bendigo Junior Football League is hopeful of turning the tables at home, as it did in 2014 and 2016. The rivalry dates back 33 years between the two competitions and has been backed by La Trobe University. The BJFL interleague

program is conducted in conjunction with the AFL Central Victoria academy, led by Strathfieldsaye Storm captain Kallen Geary. AFL Central Victoria’s Jake McLean thanked all those involved in the academy and interleague programs. “This professional program continues to improve and develop each year, so thank you to all involved, especially the coaches and officials for providing so much support for the program,” he said. “Also, a big thank you to all families for getting players to trainings, games and supporting our academy.”

World Elder Abuse Awareness Day (WEAAD) is commemorated each year on 15 June to highlight one of the worst manifestations of ageism and inequality in our society, elder abuse. Elder abuse is any act which causes harm to an older person and is carried out by someone they know and trust such as a family member or friend. The abuse may be physical, social, financial, psychological or sexual and can include mistreatment and neglect.