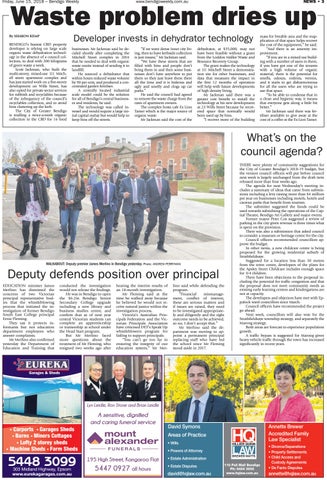 BENDIGO’s busiest CBD property developer is relying on large scale organic waste dehydration technology in the absence of a council collection, to deal with 200 kilograms of green waste a week. Scott Jackman, who built the multi-storey, mixed-use 111 Mitchell street apartment complex and has just started work on a five-storey development on Wills Street, has also opted for private sector services for rubbish and recyclables because of the infrequency of the council’s recyclables collection, and to avoid bins cluttering up the kerb. The City of Greater Bendigo is trialling a twice-a-week organic collection in the CBD for 16 food

Developer invests in dehydrator technology businesses. Mr Jackman said he decided shortly after completing the Mitchell Street complex in 2016 that he needed to deal with organic waste onsite instead of sending it to landfill. He sourced a dehydrator that within hours reduced waste volume by 90 per cent, and produced a concentrated garden fertiliser. A centrally located industrial scale model could be the solution for all of Bendigo’s central businesses and residents, he said. The technology was called invessel and would require a large initial capital outlay but would help to keep bins off the streets.

“If we want dense inner city living, then to have kerbside collection is just insane,” Mr Jackman said. “We have these streets that are filled with bins and people don’t bring them in and then some businesses don’t have anywhere to put them so they just leave them there all the time and it is hideous and ugly and smelly and clogs up car parks.” He said the council had agreed to remove the waste charge from the rates of apartment owners. The complex hosts cafe Ex Lion Tamer which is the major source of organic waste. Mr Jackman said the cost of the

dehydrator, at $35,000, may not have been feasible without a grant from the Loddon Mallee Waste and Resource Recovery Group. The grant makes the technology at 111 Mitchell Street a demonstration site for other businesses, and data that measures the impact in the first 12 months of operation will help with future developments of high density living. Mr Jackman said there was a greater cost benefit to install the technology at his new development at 23 Wills Street because he recovered space that normally would been used up by bins. “I recover more of the building

mass for liveable area and the reapplication of that space helps recover the cost of the equipment,” he said. “And there is an amenity improvement. “If you are in a mixed use building with a number of users in them, if you have got one of the tenants with a high volume of organic material, there is the potential for smells, odours, rodents, vermin, and it starts to get disharmonious for all the users who are trying to use that space. “To be able to condense that in a clean and hygienic way, it means that everyone gets along a little bit better.” Mr Jackman said there was fertiliser available to give away at the cost of a coffee at the Ex Lion Tamer.

What’s on the council agenda?

conducted the investigation would not release the findings. He was in Bendigo to open the $6.2m Bendigo Senior Secondary College upgrade including a new library and business studies centre, and confirm that as of next year central Victorian students can complete an apprenticeship or traineeship at school under the Head Start program. But Mr Merlino faced more questions about the treatment of Mr Fleming, who resigned two weeks ago after

hearing the interim results of an 18-month investigation. Mr Fleming said at the time he walked away because he believed he would not receive natural justice within the investigation process. Victoria’s Australian Principals Federation and the Victorian Principals Association have criticised DET’s Speak Up whistleblowers program for failing to support principals. “You can’t go too far in ensuring the integrity of our education system,” Mr Mer-

lino said while defending the program. “Financial mismanagement, conflict of interest, these are serious matters and if issues are raised, they need to be investigated appropriately and diligently and the right outcome needs to be achieved, so no, I don’t accept that.” Mr Merlino said the department was moving to appoint a permanent principal replacing staff who have led the school since Mr Fleming stood aside in 2017.

THERE were plenty of community suggestions for the City of Greater Bendigo’s 2018-19 budget, but the version council officers will put before council next week is largely unchanged from the draft item released more than four weeks ago. The agenda for next Wednesday’s meeting includes a summary of ideas that came from submissions including a levy raising more than $4 million per year on businesses including motels, hotels and caravan parks that benefit from tourism. The submitter suggested the funds could be used towards subsidising the operations of the Capital Theatre, Bendigo Art Gallery and major events. Former mayor Peter Cox suggested a review of parking in the city given revenue is three times what is spent on the provision. There was also a submission that asked council to consider a museum or heritage centre for the city. Council officers recommended councillors approve the budget. In other items, a new childcare centre is being proposed for the growing residential suburb of Strathfieldsaye. Suggested for a location less than 50 metres from the town centre, developers of the plans for the Apsley Street Childcare includes enough space for 114 children. There have been objections to the proposal including the potential for traffic congestion and that the proposal does not meet community needs as existing early learning centres and kindergartens are not at capacity. The developers and objectors have met with Eppalock ward councillors since March. Council officers have recommended the project go ahead. Next week, councillors will also vote for the Strathfieldsaye township strategy, and separately the Marong strategy. Both areas are forecast to experience population growth. A traffic bypass is suggested for Marong given heavy vehicle traffic through the town has increased significantly in recent years.