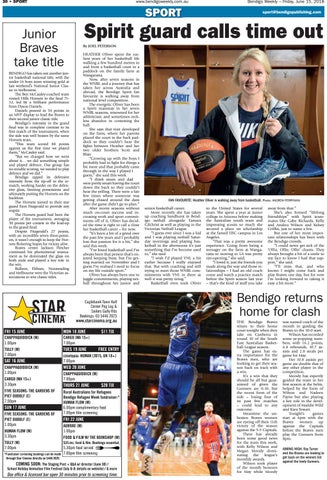 Junior Braves take title BENDIGO has taken out another junior basketball national title, with the under-16 boys team winning gold at last weekend’s National Junior Classic in Melbourne. The Ben McCauley-coached team routed Hills Hornets in the final 7152, led by a brilliant performance from Dyson Daniels. Daniels poured in 34 points in an MVP display to lead the Braves to their second junior classic title. Bendigo’s intensity in the grand final was in complete contrast to its first match of the tournament, when the side was well beaten by the same Hornets team. “This team scored 88 points against us the first time we played them,” McCauley said. “But we changed how we went about it… we did something simple and played defence. Our group has no trouble scoring, we needed to play defence and we did.” Bendigo upped its defensive intensity from the tip-off in the rematch, working harder on the defensive glass, limiting possessions and ultimately putting the Hornets on the backfoot. The Hornets turned to their star guard Eion Fitzgerald to provide any respite. The Hornets guard had been the player of the tournament, averaging 30 points per contest in the lead-up to the grand final. Despite Fitzgerald’s 27 points, with an incredible seven three-pointers, it wasn’t enough to keep the Hornets flickering hopes for victory alive. Braves centre Jackson Fletcher continued his phenomenal tournament as he dominated the glass on both ends and played a key role in the win. Bulleen, Eltham, Nunawading and Melbourne were the Victorian associations to win classic titles.

HEATHER Oliver spent the earliest years of her basketball life walking a few hundred metres to and from a basketball court in a paddock on the family farm at Wangaratta. Now, after seven seasons in the WNBL and a journey that has taken her across Australia and abroad, the Bendigo Spirit fan favourite is walking away from national level competition. The energetic Oliver has been a Spirit mainstay in her seven WNBL seasons, renowned for her athleticism and sometimes reckless abandon in contesting the ball. She says that trait developed on the farm, where her parents placed the court in the back paddock so they couldn’t hear the fights between Heather and her two older brothers Scott and Blair. “Growing up with the boys I probably had to fight for things a bit more and that probably came through in the way I played I guess,” she said this week. “I think mum and dad were pretty smart having the court down the back so they couldn’t hear the yelling. There were a fair few times where someone was getting chased around the dam after the game didn’t go to plan.” After recent seasons without much on-court success and increasing work and sport commitments off of it, Oliver has decided the time is right to call a close her basketball career – for now. “It’s been a bit of a grind over the past few years and I probably lost that passion for it a bit,” she said this week. “I’ve loved basketball and I’ve always been that person that’s enjoyed keeping busy, but I’m getting married on November and I guess I’ve realised I need to focus on my life outside sport.” Oliver has always been one to juggle commitments, playing netball throughout her junior and

FAN FAVOURITE: Heather Oliver is walking away from basketball. Photo: ANDREW PERRYMAN senior basketball career. More recently she has taken up coaching Sandhurst in Bendigo netball alongside Tamara Gilchrist as well as playing in the Victorian Netball League. “I guess ever since I was a kid and I was playing netball Saturday mornings and playing basketball in the afternoons it’s just something that I’ve become used to,” she said. “I wish I’d played VNL a bit earlier because I really enjoyed that. But with coaching and still trying to meet those WNBL commitments with VNL in there as well it was pretty tiring.” Basketball even took Oliver

to the United States for several years. She spent a year at junior college in Arizona before making the Australian youth team and impressing scouts so much she secured a place on scholarship at the famed USC campus in Los Angeles. “That was a pretty awesome experience. Going from being a teenager on the farm at Wangaratta to moving to LA was pretty eye-opening,” she said. “I loved it, just the friends you made along the way and those relationships – I had an old coach come and watch a practice match before the Spirit season last year – that’s the kind of stuff you take

away from that.” She’s also formed “lifelong friendships” with Spirit teammates like Gabe Richards, Kelly and Andrea Wilson and Kelsey Griffin, just to name a few. But one of her most important relationships has been with the Bendigo crowds. “I could never get sick of the ‘Ollie, Ollie, Ollie’ chants. They always brought a bit of a smile to my face to know I had that support,” she said. “I’ll miss that, and who knows I might come back and play Braves one day, but for now I’m looking forward to taking it easy a bit more.”

Bendigo returns home for clash THE Bendigo Braves return to their home court tonight when they take on Canberra in round 10 of the South East Australian Basketball League season. The game has extra importance for the Braves men, who are looking to get their season back on track with a win. It’s a win that they should be all but guaranteed of given the Gunners are 0-10, but the recent form of the side – losing four of its past five matches – could lead to any outcome. Meantime the unbeaten Braves women are eyeing off their 11th victory of the season against the 5-5 Capitals. There has already been some good news for the team this week, with Kelly Wilson and Megan Moody dominating the league’s monthly awards. Wilson took player of the month honours for May while Moody

was named coach of the month in guiding the Braves to the 10-0 start. Wilson has recorded some ye-popping numbers, with 16.2 points, 6.8 rebounds, 10.7 assists and 2.8 steals per game for May. Her 10.8 assists per game are double that of any other player in the competition. Moody has expertly guided the team in her first season at the helm, helped by the form of Wilson and Nadeen Payne but also playing a key role in the development of Maddie Wild and Kara Tessari. Tonight’s games start at 6pm with the Braves women up against the Capitals before the Braves men play the Gunners from 8pm. AIMING HIGH: Ray Turner and the Braves are looking to get back on the winners list against the lowly Gunners.