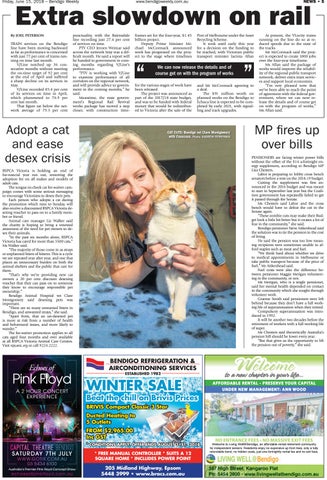 TRAIN services on the Bendigo line have been moving backward as far as performance is concerned with just 77 per cent of trains running on time last month. V/Line notched up 36 consecutive months without meeting the on-time target of 92 per cent at the end of April and suffered a sharp decline on its services in May. V/Line recorded 85.4 per cent of its services on time in April, which plummeted to 76.9 per cent last month. That figure sat below the network average of 79.3 per cent

punctuality, with the Bairnsdale line recording just 27.4 per cent of services on time. PTV CEO Jeroen Weimar said across the network May was a difficult month. He said a report will be handed to government in coming months regarding V/Line’s performance. “PTV is working with V/Line to examine performance of all corridors on the regional network, and will provide advice to government in the coming months,” he said. Meantime, the state government’s Regional Rail Revival works package has moved a step closer, with construction time-

frames set for the four-year, $1.45 billion project. Deputy Prime Minister Michael McCormack announced work has progressed on the project to the stage where timelines

Port of Melbourne under the Asset Recycling Scheme. It took until early this year for a decision on the funding to be reached, with Victorian public transport minister Jacinta Allan

for the various stages of work have been released. The project was announced as part of the 2017/18 state budget, and was to be funded with federal money that would be redistributed to Victoria after the sale of the

and Mr McCormack agreeing to a deal. The $91 million worth on planned works on the Bendigo to Echuca line is expected to be completed by early 2021, with signalling and track upgrades.

At present, the VLocity trains running on the line do so at reduced speeds due to the state of the tracks. Mr McCormack said the project is expected to create 1000 jobs over the four-year timeframe. Ms Allan said the package of works would improve the reliability of the regional public transport network, deliver extra train services and support local economies. “I’m very pleased now that we’ve been able to reach the point of agreement with the federal government, where we can now release the details and of course get on with the program of works,” Ms Allan said.

MP fires up over bills PENSIONERS are facing winter power bills without the offset of the $14 a-fortnight energy supplement, according to Bendigo MP Lisa Chesters. Labor is preparing to lobby cross bench senators before a vote on the 2018-19 budget. Cutting the supplement was first announced in the 2016 budget and was meant to start in September last year but the Coalition government has repeatedly failed to get it passed through the Senate. Ms Chesters said Labor and the cross bench would have to defeat the cut in the Senate again. “These zombie cuts may make their Budget look a little bit better but it creates a lot of fear in the community,” she said. Bendigo pensioner Steve Aitkenhead said the solution was to tie the pension to the cost of living. He said the pension was too low meaning recipients were sometimes unable to afford staples such as meat and fuel. “We think hard about whether we drive to medical appointments in Melbourne or take public transport because of the price of fuel,” Mr Aitkenhead said. Fuel costs were also the difference between pensioner Maggie Merigan volunteering in the community, or not. Ms Merigan, who is a single pensioner, said her mental health depended on contact in the community which she sought through volunteer work. Graeme Smith said pensioners were left behind because they don’t have a full working life of superannuation when they retired. Compulsory superannuation was introduced in 1992. It will be another two decades before the retirement of workers with a full working life of super. Ms Chesters said theoretically Australia’s pension bill should be lower every year. “But that gives us the opportunity to lift the pension out of poverty,” she said.

RSPCA Victoria is holding an end of fur-nancial year run out, removing the adoption fee on all makes and models of adult cats. The tongue-in-cheek cat fee-waiver campaign comes with some serious messaging to encourage Victorians to desex their pets. Each person who adopts a cat during the promotion which runs to Sunday, will also receive a discounted RSPCA Victoria desexing voucher to pass on to a family member or friend. Animal care manager Liz Walker said the charity is hoping to bring a renewed awareness of the need for pet owners to desex their animals. “In the past six months alone, RSPCA Victoria has cared for more than 5500 cats,” Ms Walker said. “The majority of those come in as strays or unplanned litters of kittens. This is a cycle we see repeated year after year, and one that places an unnecessary burden on both the animal shelters and the public that care for them. “That’s why we’re providing new cat owners a 20 per cent discount desexing voucher that they can pass on to someone they know to encourage responsible pet ownership.” Bendigo Animal Hospital vet Clare Montgomery said desexing pets was important. “There are so many unwanted litters in Bendigo, and unwanted strays,” she said. “Apart from, that an un-desexed pet is more at risk from a number of health and behavoural issues, and more likely to wander.” The fee-waiver promotion applies to all cats aged four months and over available at all RSPCA Victoria Animal Care Centres. Visit rspcavic.org or call 9224 2222.

Welcome to a new chapter in your life…

Welcome to Living Well@Bendigo, an affordable rental retirement community for independent seniors. Residents enjoy no expensive up front fees, only a fully refundable bond, no hidden costs, just one fortnightly rental fee and no exit fees.