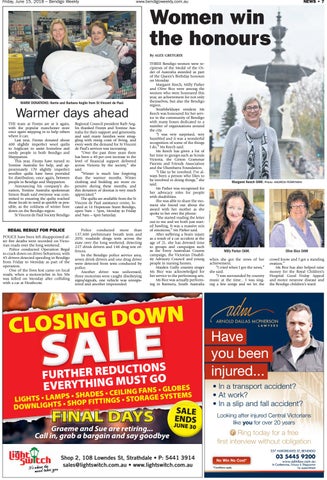 Warmer days ahead THE team at Finnys are at it again, with the popular manchester store once again stepping in to help others where it can. Last year, Finnys donated about 400 slightly imperfect wool quilts to Anglicare to assist homeless and needy people in both Bendigo and Shepparton. This year, Finnys have turned to Tontine Australia for help, and approximately 170 slightly imperfect woollen quilts have been provided for distribution, once again, between people in Bendigo and Shepparton. Announcing his company’s donation, Tontine Australia spokesman Simon Brash said everyone was committed to ensuring the quilts reached those locals in need as quickly as possible, as the coldness of winter bore down on the Bendigo region. St Vincent de Paul Society Bendigo

Regional Council president Barb Anglin thanked Finnys and Tontine Australia for their support and generosity, and said many families were struggling with rising costs of living, and every week the demand for St Vincent de Paul’s services was increasing. “Over the past three years there has been a 40 per cent increase in the level of financial support delivered across Victoria by the society,” she said. “Winter is much less forgiving than the warmer months. Winter clothing and bedding are more expensive during these months, and this donation of doonas is very much appreciated.” The quilts are available from the St Vincent de Paul assistance centre, located at 16 Hopetoun Street Bendigo, open 9am – 5pm, Monday to Friday and 9am – 4pm Saturday.

Police conducted more than 137,400 preliminary breath tests and 2051 roadside drugs tests across the state over the long weekend, detecting 227 drink drivers and 148 drug test offences. In the Bendigo police service area, seven drink drivers and one drug driver were detected from tests conducted by police. Another driver was unlicensed, three motorists were caught disobeying signs/signals, one vehicle was unregistered and another impounded.

POLICE have been left disappointed after five deaths were recorded on Victorian roads over the long weekend. Police conducted Operation Regal to crack down on driver behaviour, with 45 drivers detected speeding in Bendigo from Friday to Monday as part of the operation. One of the lives lost came on local roads, when a motorcyclist in his 50s was killed on Monday after colliding with a car at Heathcote.

Three Bendigo women were recipients of the Medal of the Order of Australia awarded as part of the Queen’s Birthday honours on Monday. Margaret Keech, Milly Parker and Olive Bice were among the women who were honoured this year, an achievement for not only themselves, but also the Bendigo region. Strathfieldsaye resident Ms Keech was honoured for her service in the community of Bendigo with many hours dedicated to a number of organisations around the city. “I was very surprised, very humbled and it was a wonderful recognition of some of the things I do,” Ms Keech said. Ms Keech has given a lot of her time to groups such as Scouts Victoria, the Girton Grammar Parents and Friends Association and the Ulumbarra Foundation. “I like to be involved. I’ve always been a person who likes to be involved in doing things,” she said. Ms Parker was recognised for her advocacy roles for people with disabilities. She was able to share the moment she found out about the award with her mother as she spoke to her over the phone. “She started reading the letter out to me and we both just started bawling. It was a massive mix of emotions,” Ms Parker said. After suffering a brain injury as a result of a car accident at the age of 21, she has devoted time to groups and campaigns such as the Every Australian Counts campaign, the Victorian Disability Advisory Council and young people in nursing homes. Maiden Gully country singer Ms Bice was acknowledged for her service to the performing arts. Ms Bice was actually performing in Barmera, South Australia

Graeme and Sue are retiring... Call in, grab a bargain and say goodbye

when she got the news of her achievement. “I cried when I got the news,” she said. “I was surrounded by country music at the time... I was singing a few songs and we let the

crowd know and I got a standing ovation.” Ms Bice has also helped raise money for the Royal Children’s Hospital Good Friday Appeal and motor neurone disease and the Bendigo children’s ward.

Have you been injured... • In a transport accident? • At work? • In a slip and fall accident? Looking after injured Central Victorians like you for over 20 years

No Win No Cost* *Conditions apply

In Castlemaine, Echuca & Shepparton by appointment