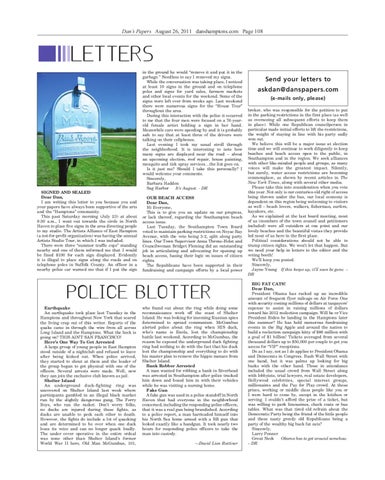 SIGNED AND SEALED Dear Dan, I am writing this letter to you because you and your papers have always been supportive of the arts and the “Hamptons” community. This past Saturday morning (July 23) at about 9:30 a.m., I went out towards the circle in North Haven to place five signs in the area directing people to my studio. The Artists Alliance of East Hampton (a not-for-profit organization) was having the annual Artists Studio Tour, in which I was included. There were three “summer traffic cops” standing nearby and one of them informed me that I would be fined $100 for each sign displayed. Evidently it is illegal to place signs along the roads and on telephone poles in Suffolk County. An officer in a nearby police car warned me that if I put the sign

in the ground he would “remove it and put it in the garbage.” Needless to say I removed my signs. While the conversation was taking place, I noticed at least 10 signs in the ground and on telephone poles and signs for yard sales, farmers markets and other local events for the weekend. Some of the signs were left over from weeks ago. Last weekend there were numerous signs for the “House Tour” throughout the area. During this interaction with the police it occurred to me that the four men were focused on a 76-yearold female artist holding a sign in her hand. Meanwhile cars were speeding by and it is probably safe to say that at least three of the drivers were talking on their cellphones. Last evening I took my usual stroll through the neighborhood. It is interesting to note how many signs are displayed near the road – about an upcoming election, roof repair, house painting, mosquito and tick spray services…the list goes on. Is it just me? Should I take this personally? I would welcome your comments. Sincerely, Barbara Hadden Sag Harbor It’s August. - DR OUR Beach Access Dear Dan, Hi Everyone, This is to give you an update on our progress, or lack thereof, regarding the Southampton beach access issue. Last Tuesday, the Southampton Town Board voted to maintain parking restrictions on Noyac Bay Avenue, with the vote being 3-2, split along party lines. Our Town Supervisor Anna Throne-Holst and Councilwoman Bridget Fleming did an outstanding job in articulating and advocating for opening up beach access, basing their logic on issues of citizen rights. The Republicans have been supported in their fundraising and campaign efforts by a local power

Police Blotter Earthquake An earthquake took place last Tuesday in the Hamptons and throughout New York that scared the living crap out of this writer. Reports of the quake came in through the wire from all across Long Island and the Hamptons. What the heck is going on? THIS AIN’T SAN FRANCISCO! Here’s One Way To Get Arrested A large group of young people in East Hampton stood outside of a nightclub and refused to leave after being kicked out. When police arrived, they started to shout at them and the leader of the group began to get physical with one of the officers. Several arrests were made. Well, now they can join the exclusive club known as jail. Shelter Island An underground duck-fighting ring was uncovered on Shelter Island last week where participants gambled in an illegal black market run by the slightly dangerous gang, The Ferry Boys, who ran the racket. Don’t worry folks, no ducks are injured during these fights, as ducks are unable to peck each other to death. However, the fights do include a lot of quacking and are determined to be over when one duck loses its voice and can no longer quack loudly. The under cover operative in the entire ordeal was none other than Shelter Island’s former World War II hero, Old Man McGumbus, 101,

who found out about the ring while doing some reconnaissance work off the coast of Shelter Island. He was looking for incoming Russian spies determined to spread communism. McGumbus alerted police about the ring when HIS duck, who’s name is Enola, lost the championship battle last weekend. According to McGumbus, the reason he exposed the underground duck fighting ring had nothing to do with the fact that his duck lost the championship and everything to do with his master plan to remove the hippie menace from Shelter Island. Bank Robber Arrested A man wanted for robbing a bank in Riverhead was arrested in Southampton after police tracked him down and boxed him in with their vehicles while he was visiting a nursing home. Fake Gun A fake gun was used in a police standoff in North Haven that had everyone in the neighborhood concerned, including the responding police officers, that it was a real gun being brandished. According to a police report, a man barricaded himself into his North Sea home armed with a BB gun that looked exactly like a handgun. It took nearly two hours for responding police officers to take the man into custody. —David Lion Rattiner

Send your letters to askdan@danspapers.com (e-mails only, please) broker, who was responsible for the petition to put in the parking restrictions in the first place (as well as overseeing all subsequent efforts to keep them in place). While one Republican councilperson in particular made initial efforts to lift the restrictions, the weight of staying in line with his party sadly won out. We believe this will be a major issue at election time and we will continue to work diligently to keep beaches and beach access open to the public, in Southampton and in the region. We seek alliances with other like-minded people and groups, as many voices will make the greatest impact. Silently, but surely, water access restrictions are becoming commonplace, as shown by recent articles in The New York Times, along with several other media. Please take this into consideration when you vote this year. Not only is our centuries-old right of access being thrown under the bus, our local economy is dependent on this region being welcoming to visitors as well – beach lovers, walkers, fisherman, surfers, kayakers, etc. As we explained at the last board meeting, most of us (members of the town council and petitioners included) were all outsiders at one point and our lovely beaches and the beautiful vistas they provide led most of us here in the first place. Political considerations should not be able to trump citizen rights. We won’t let that happen. But we need your help in letters to the editor and the voting booth! We’ll keep you posted. Sincerely, Jayne Young If this keeps up, it’ll soon be gone. – DR BIG FAT CATS! Dear Dan, President Obama has racked up an incredible amount of frequent flyer mileage on Air Force One with security costing millions of dollars at taxpayers’ expense to assist in raising millions of dollars toward his 2012 reelection campaign. Will he or Vice President Biden be landing in the Hamptons later this summer? He has held numerous fundraising events in the Big Apple and around the nation to build a reelection campaign kitty of $86 million with a goal of $1 billion! Tickets averaged from several thousand dollars up to $50,000 per couple to get you access for “VIP” receptions. Do as I say, not as I do applies to President Obama and Democrats in Congress. Bash Wall Street with one hand, but it was palms up looking for big bucks with the other hand. Those in attendance included the usual crowd from Wall Street along with lobbyists, trial lawyers, real estate developers, Hollywood celebrities, special interest groups, millionaires and the Pay for Play crowd. At those prices, working or middle class people like you or I were hard to come by, except in the kitchen or serving. I couldn’t afford the price of a ticket, but was willing to park limousines, check coats or bus tables. What was that tired old refrain about the Democratic Party being the friend of the little people and those nasty greedy old Republicans being a party of the wealthy big buck fat cats? Sincerely, Larry Penner Great Neck Obama has to get around somehow. – DR