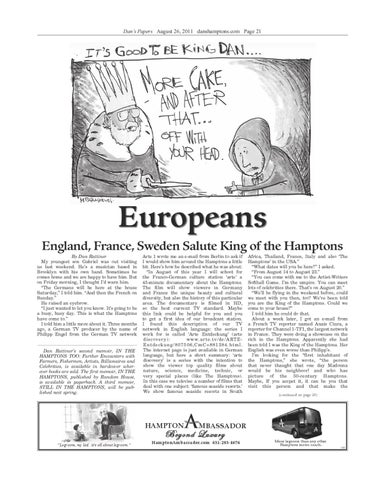 By Dan Rattiner My youngest son Gabriel was out visiting us last weekend. He’s a musician based in Brooklyn with his own band. Sometimes he comes home and we are happy to have him. But on Friday morning, I thought I’d warn him. “The Germans will be here at the house Saturday,” I told him. “And then the French on Sunday.” He raised an eyebrow. “I just wanted to let you know. It’s going to be a busy, busy day. This is what the Hamptons have come to.” I told him a little more about it. Three months ago, a German TV producer by the name of Philipp Engel from the German TV network

Arte 1 wrote me an e-mail from Berlin to ask if I would show him around the Hamptons a little bit. Here’s how he described what he was about: “In August of this year I will schoot for the Franco-German culture station ‘arte’ a 45-minute documentary about the Hamptons. The film will show viewers in Germany and France the unique beauty and cultural diversity, but also the history of this particular area. The documentary is filmed in HD, so the best current TV standard. Maybe this link could be helpful for you and you to get a first idea of our broadcast station. I found this description of our TV network in English language: the series I work for is called ‘Arte Entdeckung’ (arte discovery): www.arte.tv/de/ARTEEntdeckung/807506,CmC=881384.html. The internet page is just available in German language, but here a short summary: ‘arte discovery’ is a series with the intention to show the viewer top quality films about nature, science, medicine, technic, or very special places (like The Hamptons). In this case we televise a number of films that deal with one subject: ‘famous seaside resorts.’ We show famous seaside resorts in South

Africa, Thailand, France, Italy and also ‘The Hamptons’ in the USA.” “What dates will you be here?” I asked. “From August 14 to August 23.” “You can come with me to the Artist-Writers Softball Game. I’m the umpire. You can meet lots of celebrities there. That’s on August 20.” “We’ll be flying in the weekend before, could we meet with you then, too? We’ve been told you are the King of the Hamptons. Could we come to your house?” I told him he could do that. About a week later, I got an e-mail from a French TV reporter named Anais Ciura, a reporter for Channel 1-TF1, the largest network in France. They were doing a showcase on the rich in the Hamptons. Apparently she had been told I was the King of the Hamptons. Her English was even worse than Philipp’s. I’m looking for the “first inhabitant of the Hamptons,” she wrote, “the person that never thaught that one day Madonna would be his neighboor! and who has picture of the 50-century Hamptons. Maybe, If you accpet it, it can be you that visit this person and that make the (continued on page 26)

More legroom than any other Hamptons motor coach.