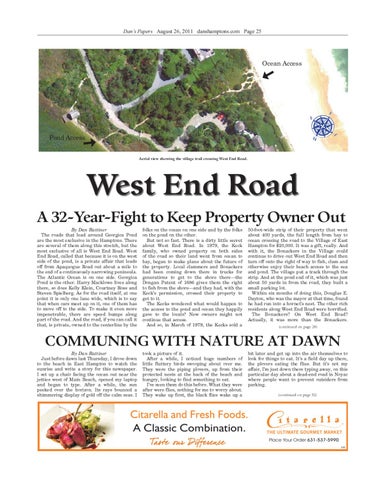 West End Road A 32-Year-Fight to Keep Property Owner Out By Dan Rattiner The roads that lead around Georgica Pond are the most exclusive in the Hamptons. There are several of them along this stretch, but the most exclusive of all is West End Road. West End Road, called that because it is on the west side of the pond, is a private affair that leads off from Apaquogue Road out about a mile to the end of a continuously narrowing peninsula. The Atlantic Ocean is on one side. Georgica Pond is the other. Harry Macklowe lives along there, so does Kelly Klein, Courtney Ross and Steven Spielberg. As for the road itself, at one point it is only one lane wide, which is to say that when cars meet up on it, one of them has to move off to the side. To make it even more impenetrable, there are speed bumps along part of the road. And the road, if you can call it that, is private, owned to the centerline by the

folks on the ocean on one side and by the folks on the pond on the other. But not so fast. There is a dirty little secret about West End Road. In 1979, the Keck family, who owned property on both sides of the road so their land went from ocean to bay, began to make plans about the future of the property. Local clammers and Bonackers had been coming down there in trucks for generations to get to the shore there—the Dongan Patent of 1686 gives them the right to fish from the shore—and they had, with the Keck’s permission, crossed their property to get to it. The Kecks wondered what would happen to the access to the pond and ocean they happily gave to the locals? New owners might not continue that access. And so, in March of 1979, the Kecks sold a

50-foot-wide strip of their property that went about 400 yards, the full length from bay to ocean crossing the road to the Village of East Hampton for $20,000. It was a gift, really. And with it, the Bonackers in the Village could continue to drive out West End Road and then turn off onto the right of way to fish, clam and otherwise enjoy their beach access to the sea and pond. The village put a track through the strip. And at the pond end of it, which was just about 50 yards in from the road, they built a small parking lot. Within six months of doing this, Douglas E. Dayton, who was the mayor at that time, found he had run into a hornet’s nest. The other rich residents along West End Road were horrified. The Bonackers? On West End Road? Actually, it was more than the Bonackers. (continued on page 28)

COMMUNING WITH NATURE AT DAWN By Dan Rattiner Just before dawn last Thursday, I drove down to the beach in East Hampton to watch the sunrise and write a story for this newspaper. I set up a chair facing the ocean out near the jetties west of Main Beach, opened my laptop and began to type. After a while, the sun peeked over the horizon. Its rays bounced a shimmering display of gold off the calm seas. I

took a picture of it. After a while, I noticed huge numbers of little fluttery birds swooping about over me. They were the piping plovers, up from their protected nests at the back of the beach and hungry, looking to find something to eat. I’ve seen them do this before. What they were after were flies, nothing for me to worry about. They wake up first, the black flies wake up a

bit later and get up into the air themselves to look for things to eat. It’s a field day up there, the plovers eating the flies. But it’s not my affair, I’m just down there typing away, on this particular day about a dead-end road in Noyac where people want to prevent outsiders from parking.