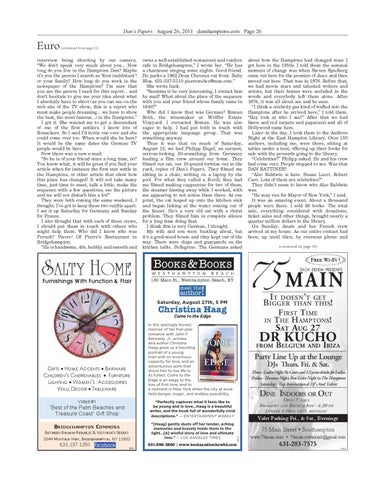 interview being shooting by our camera. “We don’t speak very much about you... How long do you live in the Hamptons Dan? Maybe it’s you the person I search as ‘first inahbitant’! or your family? How long do you work in the newspaper of the Hamptons? I’m sure that you are the person I need for this report... and don’t hesitate to give me your idea about what I absolutly have to shoot (as you can see on the web site of the TV show, this is a report who must make people dreaming... we have to show the best, the most famous...) in the Hamptons.” I got it. She wanted me to get a descendant of one of the first settlers. I know lots of Bonackers. So I said I’d invite one over and she could come over too. When would she be here? It would be the same dates the German TV people would be here. Now there was a new e-mail. “So he is of your friend since a long time, no? You know what, it will be great if you find your article when for instance the first star settle in the Hamptons, or other article that show how this place has changed! It will not take many time, just time to meet, talk a little, make the sequence with a few questions, see the picture and we will not disturb him a lot!” They were both coming the same weekend, I thought. I’ve got to keep these two outfits apart. I set it up Saturday for Germany and Sunday for France. I also thought that with each of these crews, I should put them in touch with others who might help them. Who did I know who was French? Pierre! Of Pierre’s Restaurant in Bridgehampton. “He is handsome, 40s, bubbly and smooth and

owns a well-established restaurant and outdoor cafe in Bridgehampton,” I wrote her. “He has a chanteuse singing some nights. Good friend. He parks a 1962 Deux Chevaux out front. Baby Blue. 631-537-5110 pierreweber@msn.com.” She wrote back. “Seemms to be very interesting, I contact him by mail! What about the place of the sequence with you and your friend whose family came in 1640?” Who did I know that was German? Roman Roth, the winemaker at Wolffer Estate Vineyard. I contacted Roman. He was also eager to help. I had put both in touch with the appropriate language group. That was something anyway. Thus it was that on much of Saturday, August 13, we had Philipp Engel, an earnest, serious-looking 30-something from Germany leading a film crew around our home. They filmed our cat, our 10-pound tortoise out in the yard, copies of Dan’s Papers. They filmed me sitting in a chair, writing on a laptop by the pool. For what they called a B-roll, they had me filmed making cappuccino for two of them, the steamer hissing away while I worked, with me appearing to not notice them there. At one point, the cat leaped up onto the kitchen sink and began licking at the water coming out of the faucet. He’s a very old cat with a thirst problem. They filmed him in complete silence for a long time doing that. I think this is very German, I thought. My wife and son were bustling about, but it’s a good-sized house and they kept out of the way. There were chips and guacamole on the kitchen table. Pellegrino. The Germans asked

it Doesn’t get Bigger than this!

Christina Haag Come to the Edge

“[Haag] gently dusts off her tender, aching memories and bravely holds them to the light...[A] wistful story of love and ultimate loss.” — LOS ANGELES TIMES

Dr KuCho From Belgium anD iBiza Party Line Up at the Lounge DJs Thurs. Fri. & Sat.

Dine inDoors or out

“Best of the Palm Beaches and Treasure Coast” Gift Shop

“Perfectly captures what it feels like to be young and in love…Haag is a beautiful writer, and the book full of wonderfully vivid descriptions.” — ENTERTAINMENT WEEKLY

In this searingly honest memoir of her ﬁve-year romance with John F. Kennedy, Jr., actress and author Christina Haag gives us a haunting portrait of a young man with an enormous capacity for love, and an adventurous spirit that drove him to live life to its fullest. Come to the Edge is an elegy to the loss of ﬁrst love, and to a moment in New York when the city at once held danger, magic, and endless possibility.

about how the Hamptons had changed since I got here in the 1950s. I told them the seminal moment of change was when Steven Spielberg came out here for the premier of Jaws and then moved out here. That was in 1976. Before that, we had movie stars and talented writers and artists, but their homes were secluded in the woods and everybody left them alone. After 1976, it was all about see and be seen. “I think a celebrity gas kind of wafted into the Hamptons after he arrived here,” I told them. “Hey look at who I see?” After that we had limos and red carpets and paparazzi and all of Hollywood came here. Later in the day, I took them to the Authors Night at the East Hampton Library. Over 150 authors, including me, were there, sitting at tables under a tent, offering up their books for sale with the proceeds going to the library. “Celebrities?” Philipp asked. He and his crew had come over. People stopped to see. Was that DAN RATTINER? “Alec Baldwin is here. Susan Lucci. Robert Caro. Lots of them are celebrities?” They didn’t seem to know who Alec Baldwin was. “He may run for Mayor of New York,” I said. It was an amazing event. About a thousand people were there. I sold 26 books. The total sale, everything considered with donations, ticket sales and other things, brought nearly a quarter million dollars to the library. On Sunday, Anais and her French crew arrived at my house. As our entire contact had been, up until then, by overseas phone and