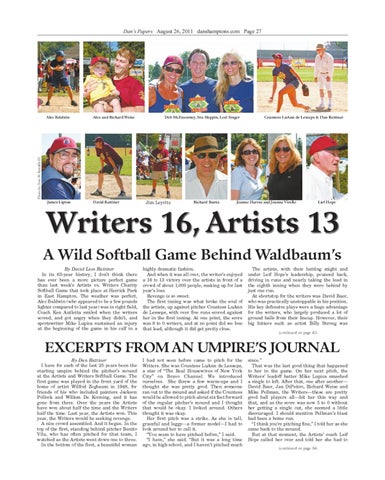 Writers 16, Artists 13 A Wild Softball Game Behind Waldbaum’s By David Lion Rattiner In its 63-year history, I don’t think there has ever been a more picture perfect game than last week’s Artists vs. Writers Charity Softball Game that took place at Herrick Park in East Hampton. The weather was perfect, Alec Baldwin (who appeared to be a few pounds lighter compared to last year) was in right field, Coach Ken Autletta smiled when the writers scored, and got angry when they didn’t, and sportswriter Mike Lupica sustained an injury at the beginning of the game in his calf in a

highly dramatic fashion. And when it was all over, the writer’s enjoyed a 16 to 13 victory over the artists in front of a crowd of about 1,000 people, making up for last year’s loss. Revenge is so sweet. The first inning was what broke the soul of the artists, up against pitcher Countess LuAnn de Lesseps, with over five runs scored against her in the first inning. At one point, the score was 8 to 0 writers, and at no point did we lose that lead, although it did get pretty close.

The artists, with their batting might and under Leif Hope’s leadership, pounced back, driving in runs and nearly taking the lead in the eighth inning when they were behind by just one run. At shortstop for the writers was David Baer, who was practically unstoppable in his position. His key defensive plays were a huge advantage for the writers, who largely produced a lot of ground balls from their lineup. However, their big hitters such as artist Billy Strong was (continued on page 42)

EXCERPTS FROM AN UMPIRE’S JOURNAL By Dan Rattiner I have for each of the last 25 years been the starting umpire behind the pitcher’s mound at the Artists and Writers Softball Game. The first game was played in the front yard of the home of artist Wilfrid Zogbaum in 1948, for friends of his who included painters Jackson Pollock and Willem De Kooning, and it has gone from there. Over the years the Artists have won about half the time and the Writers half the time. Last year, the Artists won. This year, the Writers would be seeking revenge. A nice crowd assembled. And it began. In the top of the first, standing behind pitcher Benito Vila, who has often pitched for that team, I watched as the Artists went down one to three. In the bottom of the first, a beautiful woman

I had not seen before came to pitch for the Writers. She was Countess LuAnn de Lesseps, a star of “The Real Housewives of New York City” on Bravo Channel. We introduced ourselves. She threw a few warm-ups and I thought she was pretty good. Then someone ran out to the mound and asked if the Countess would be allowed to pitch about six feet forward of the regular pitcher’s mound and I thought that would be okay. I looked around. Others thought it was okay. Her first pitch was a strike. As she is tall, graceful and leggy—a former model—I had to look around her to call it. “You seem to have pitched before,” I said. “I have,” she said. “But it was a long time ago, in high school, and I haven’t pitched much

since.” That was the last good thing that happened to her in the game. On her next pitch, the Writers’ leadoff batter Mike Lupica smashed a single to left. After that, one after another— David Baer, Jan DiPeitro, Richard Weise and Mike Pellman, the Writers—these are pretty good ball players all—hit her this way and that, and as the score was now 5 to 0 without her getting a single out, she seemed a little discouraged. I should mention Pellman’s blast had been a home run. “I think you’re pitching fine,” I told her as she came back to the mound. But at that moment, the Artists’ coach Leif Hope called her over and told her she had to (continued on page 34)