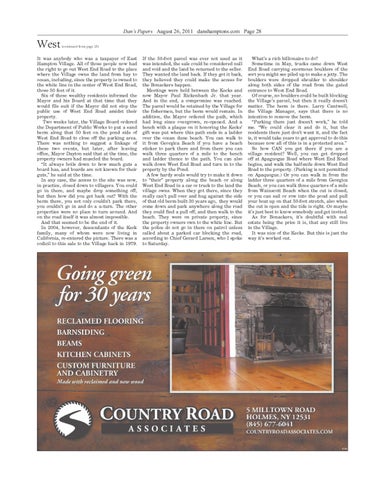 It was anybody who was a taxpayer of East Hampton Village. All of those people now had the right to go out West End Road to the place where the Village owns the land from bay to ocean, including, since the property is owned to the white line in the center of West End Road, those 50 feet of it. Six of these wealthy residents informed the Mayor and his Board at that time that they would file suit if the Mayor did not stop the public use of West End Road amidst their property. Two weeks later, the Village Board ordered the Department of Public Works to put a sand berm along that 50 feet on the pond side of West End Road to close off the parking area. There was nothing to suggest a linkage of these two events, but later, after leaving office, Mayor Dayton said that at the time, the property owners had muscled the board. “It always boils down to how much guts a board has, and boards are not known for their guts,” he said at the time. In any case, the access to the site was now, in practice, closed down to villagers. You could go in there, and maybe drop something off, but then how did you get back out? With the berm there, you not only couldn’t park there, you couldn’t go in and do a u-turn. The other properties were no place to turn around. And on the road itself it was almost impossible. And that seemed to be the end of it. In 2004, however, descendants of the Keck family, many of whom were now living in California, re-entered the picture. There was a codicil to this sale to the Village back in 1979.

If the 50-foot parcel was ever not used as it was intended, the sale could be considered null and void and the land be returned to the seller. They wanted the land back. If they got it back, they believed they could make the access for the Bonackers happen. Meetings were held between the Kecks and now Mayor Paul Rickenbach Jr. that year. And in the end, a compromise was reached. The parcel would be retained by the Village for the fishermen, but the berm would remain. In addition, the Mayor ordered the path, which had long since overgrown, re-opened. And a bench with a plaque on it honoring the Kecks’ gift was put where this path ends in a ladder over the ocean dune beach. You can walk to it from Georgica Beach if you have a beach sticker to park there and from there you can walk three quarters of a mile to the bench and ladder thence to the path. You can also walk down West End Road and turn in to the property by the Pond. A few hardy souls would try to make it down to “their” property along the beach or along West End Road in a car or truck to the land the village owns. When they got there, since they really can’t pull over and hug against the side of that old berm built 30 years ago, they would come down and park anywhere along the road they could find a pull off, and then walk to the beach. They were on private property, since the property owners own to the white line. But the police do not go in there on patrol unless called about a parked car blocking the road, according to Chief Gerard Larsen, who I spoke to Saturday.

What’s a rich billionaire to do? Sometime in May, trucks came down West End Road carrying enormous boulders of the sort you might see piled up to make a jetty. The boulders were dropped shoulder to shoulder along both sides of the road from the gated entrance to West End Road. Of course, no boulders could be built blocking the Village’s parcel, but then it really doesn’t matter. The berm is there. Larry Cantwell, the Village Manager, says that there is no intention to remove the berm. “Parking there just doesn’t work,” he told me. “We could clear it and do it, but the residents there just don’t want it, and the fact is, it would take years to get approval to do this because now all of this is in a protected area.” So how CAN you get there if you are a village resident? Well, you can get dropped off at Apaguogue Road where West End Road begins, and walk the half-mile down West End Road to the property. (Parking is not permitted on Apaquogue.) Or you can walk in from the ladder three quarters of a mile from Georgica Beach, or you can walk three quarters of a mile from Wainscott Beach when the cut is closed, or you can sail or row into the pond and pull your boat up on that 50-foot stretch, also when the cut is open and the tide is right. Or maybe it’s just best to know somebody and get invited. As for Bonackers, it’s doubtful with real estate being the price it is, that any still live in the Village. It was nice of the Kecks. But this is just the way it’s worked out.