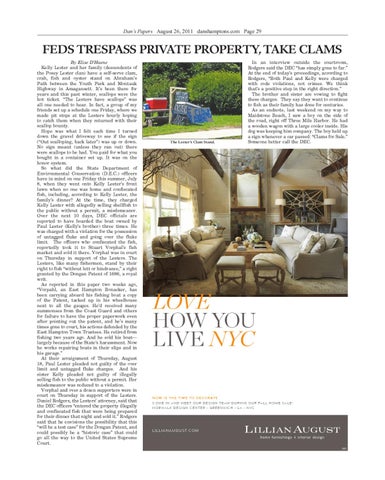 FEDS trespass PRIVATE PROPERTY, TAKE Clams By Elise D’Haene Kelly Lester and her family (descendents of the Posey Lester clan) have a self-serve clam, crab, fish and oyster stand on Abraham’s Path between the Youth Park and Montauk Highway in Amagansett. It’s been there for years and this past winter, scallops were the hot ticket. “The Lesters have scallops” was all one needed to hear. In fact, a group of my friends set up a schedule one Friday, where we made pit stops at the Lesters hourly hoping to catch them when they returned with their scallop bounty. Hope was what I felt each time I turned down the gravel driveway to see if the sign (“Out scalloping, back later”) was up or down. No sign meant (unless they ran out) there were scallops to be had. You paid for what you bought in a container set up. It was on the honor system. So what did the State Department of Environmental Conservation (D.E.C.) officers have in mind on one Friday this summer, July 8, when they went onto Kelly Lester’s front lawn when no one was home and confiscated fish, including, according to Kelly Lester, the family’s dinner? At the time, they charged Kelly Lester with allegedly selling shellfish to the public without a permit, a misdemeanor. Over the next 10 days, DEC officials are reported to have boarded the boat owned by Paul Lester (Kelly’s brother) three times. He was charged with a violation for the possession of untagged fluke and going over the fluke limit. The officers who confiscated the fish, reportedly took it to Stuart Vorphal’s fish market and sold it there. Vorphal was in court on Thursday in support of the Lesters. The Lesters, like many fishermen, stand by their right to fish “without lett or hindrance,” a right granted by the Dongan Patent of 1686, a royal writ. As reported in this paper two weeks ago, “Vorpahl, an East Hampton Bonacker, has been carrying aboard his fishing boat a copy of the Patent, tacked up in his wheelhouse next to all the gauges. He’d received many summonses from the Coast Guard and others for failure to have the proper paperwork even after pointing out the patent, and he’s many times gone to court, his actions defended by the East Hampton Town Trustees. He retired from fishing two years ago. And he sold his boat— largely because of the State’s harassment. Now he works repairing boats in their slips and in his garage.” At their arraignment of Thursday, August 18, Paul Lester pleaded not guilty of the over limit and untagged fluke charges. And his sister Kelly pleaded not guilty of illegally selling fish to the public without a permit. Her misdemeanor was reduced to a violation. Vorphal and over a dozen supporters were in court on Thursday in support of the Lesters. Daniel Rodgers, the Lesters’ attorney, said that the DEC officers “entered the property illegally and confiscated fish that were being prepared for their dinner that night and sold it.” Rodgers said that he envisions the possibility that this “will be a test case” for the Dongan Patent, and could possibly be a “historic case” that could go all the way to the United States Supreme Court.

In an interview outside the courtroom, Rodgers said the DEC “has simply gone to far.” At the end of today’s proceedings, according to Rodgers, “Both Paul and Kelly were charged with code violations, not crimes. We think that’s a positive step in the right direction.” The brother and sister are vowing to fight these charges. They say they want to continue to fish as their family has done for centuries. As an endnote, last weekend on my way to Maidstone Beach, I saw a boy on the side of the road, right off Three Mile Harbor. He had a wooden wagon with a large cooler inside. His dog was keeping him company. The boy held up a sign whenever a car passed: “Clams for Sale.” Someone better call the DEC.