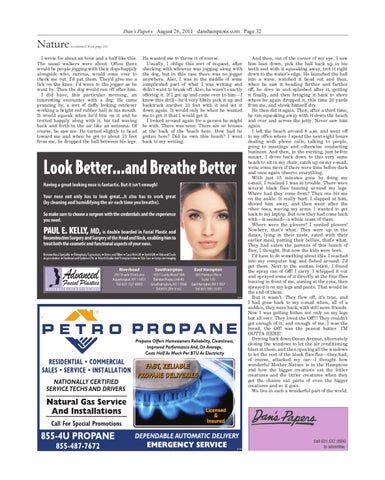 I wrote for about an hour and a half like this. The usual walkers were about. Often there would be people jogging with their dogs happily alongside who, curious, would come over to check me out. I’d pat them. They’d give me a lick on the knee. I’d wave to the jogger as he went by. Then the dog would run off after him. I did have, this particular morning, an interesting encounter with a dog. He came prancing by, a sort of daffy looking retriever working a bright red rubber ball in his mouth. It would squeak when he’d bite on it and he trotted happily along with it, his tail waving back and forth in the air like an antenna. Of course, he saw me. He turned slightly to head toward me and when he got to about 10 feet from me, he dropped the ball between his legs.

He wanted me to throw it of course. Usually, I oblige this sort of request, after checking with whoever was jogging along with the dog, but in this case there was no jogger anywhere. Also, I was in the middle of some complicated part of what I was writing and didn’t want to break off. Also, he wasn’t exactly offering it. If I got up and came over to him—I know this drill—he’d very likely pick it up and backtrack another 10 feet with it and set it down again. It would only be when he wanted me to get it that I would get it. I looked around again for a person he might be with. There was none. There are no houses at the back of the beach here. How had he gotten here? Did he own this beach? I went back to my writing.

And then, out of the corner of my eye, I saw him lean down, pick the ball back up in his teeth and with it squeaking away, trot it right down to the water’s edge. He launched the ball into a wave, watched it head out and then, when he saw it heading farther and farther off, he dove in and splashed after it, getting it finally, and then bringing it back to shore where he again dropped it, this time 20 yards from me, and shook himself dry. He then did it again. Then, after a third time, he ran squeaking away with it down the beach and over and across the jetty. Never saw him again. I left the beach around 8 a.m. and went off to my office where I spent the next eight hours dealing with phone calls, talking to people, going to meetings and otherwise conducting business. And then, in the evening, just before sunset, I drove back down to this very same beach to sit in my chair, catch up on my e-mail, write some more if there were time before dark and once again observe everything. With just 15 minutes gone by doing my e-mail, I realized I was in trouble. There were several black flies buzzing around my legs. Where had they come from? Then one bit me on the ankle. It really hurt. I slapped at him, shooed him away, and then went after the other ones, waving my arms. I wanted to get back to my laptop. But now they had come back with—it seemed—a whole team of them. Where were the plovers? I needed plovers! Nowhere, that’s what. They were up in the dunes, lying in their nests, sated with their earlier meal, patting their bellies, that’s what. They had eaten the parents of this bunch of flies, I thought. But now the kids were born. I’d have to do something about this. I reached into my computer bag and fished around. I’d get them. Next to the suntan lotion, I found the spray can of Off! I carry. I whipped it out and sprayed some of it directly at the four flies buzzing in front of me, aiming at the eyes, then sprayed it on my legs and pants. That would be the end of them. But it wasn’t. They flew off, it’s true, and I had gone back to my e-mail when, all of a sudden, they were back, with still more friends. Now I was getting bitten not only on my legs but all over. They loved the Off!!! They couldn’t get enough of it, and enough of me. I was the bread, the Off! was the peanut butter. I’M OUTTA HERE! Driving back down Ocean Avenue, alternately closing the windows to let the air conditioning blast at them, and then opening all the windows to let the rest of the black flies flee—they had, of course, attacked my car—I thought how wonderful Mother Nature is in the Hamptons and how the bigger creatures eat the littler creatures and the littler creatures when they get the chance eat parts of even the bigger creatures and so it goes. We live in such a wonderful part of the world.