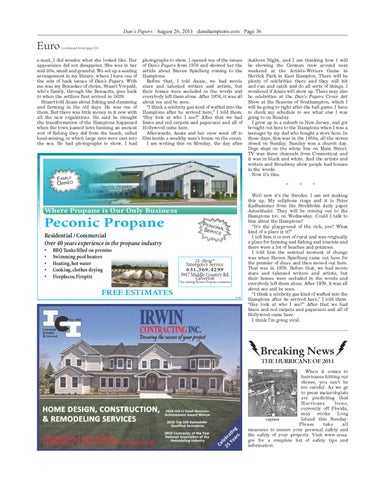 e-mail, I did wonder what she looked like. Her appearance did not disappoint. She was in her mid-20s, small and graceful. We set up a seating arrangement in my library, where I have one of the sets of back issues of Dan’s Papers. With me was my Bonacker of choice, Stuart Vorpahl, who’s family, through the Bennetts, goes back to when the settlers first arrived in 1639. Stuart told Anais about fishing and clamming and farming in the old days. He was one of them. But there was little money in it now with all the new regulations. He said he thought the transformation of the Hamptons happened when the town passed laws banning an ancient sort of fishing they did from the beach, called haul-seining, in which large nets were cast into the sea. He had photographs to show. I had

photographs to show. I opened one of the issues of Dan’s Papers from 1976 and showed her the article about Steven Spielberg coming to the Hamptons. Before that, I told Anais, we had movie stars and talented writers and artists, but their homes were secluded in the woods and everybody left them alone. After 1976, it was all about see and be seen. “I think a celebrity gas kind of wafted into the Hamptons after he arrived here,” I told them. “Hey look at who I see?” After that we had limos and red carpets and paparazzi and all of Hollywood came here. Afterwards, Anais and her crew went off to film inside a wealthy man’s house on the ocean. I am writing this on Monday, the day after

Where Propane is Our Only Business

Authors Night, and I am thinking how I will be showing the German crew around next weekend at the Artists-Writers Game in Herrick Park in East Hampton. There will be plenty of celebrities there and they will hit and run and catch and do all sorts of things. I wondered if Anais will show up. There may also be celebrities at the Dan’s Papers Cover Art Show at the Seasons of Southampton, which I will be going to right after the ball game. I have to check my schedule to see what else I was going to on Sunday. I grew up in a suburb in New Jersey, and got brought out here to the Hamptons when I was a teenager by my dad who bought a store here. In those days, this was in the 1950s, all the stores closed on Sunday. Sunday was a church day. Dogs slept on the white line on Main Street. TV was three channels from Connecticut and it was in black and white. And the artists and writers and Broadway show people had houses in the woods. Now it’s this.

Well now it’s the Swedes. I am not making this up. My cellphone rings and it is Peter Kadhammer from the Stockholm daily paper Astonbladet. They will be coming out to the Hamptons too, on Wednesday. Could I talk to him about the Hamptons? “It’s the playground of the rich, yes? What kind of a place is it?” I tell him it is sort of rural and was originally a place for farming and fishing and tourists and there were a lot of beaches and potatoes. I told him the seminal moment of change was when Steven Spielberg came out here for the premier of Jaws and then moved out here. That was in 1976. Before that, we had movie stars and talented writers and artists, but their homes were secluded in the woods and everybody left them alone. After 1976, it was all about see and be seen. “I think a celebrity gas kind of wafted into the Hamptons after he arrived here,” I told them. “Hey look at who I see?” After that we had limos and red carpets and paparazzi and all of Hollywood came here. I think I’m going viral.

Breaking News The Hurricane of 2011 When it comes to hurricanes hitting our shores, you can’t be too careful. As we go to press meterologists are predicting that Hurricane Irene, currently off Florida, may strike Long caption Island this Sunday. Please take all measures to ensure your personal safety and the safety of your property. Visit www.noaa. gov for a complete list of safety tips and information.