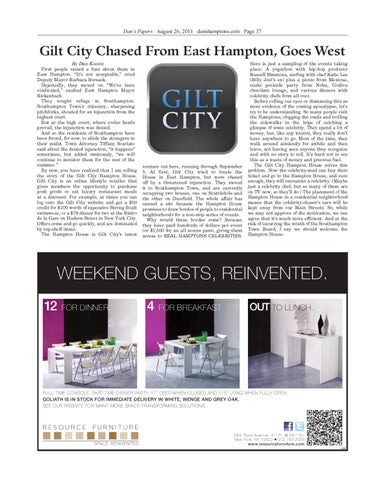 Gilt City Chased From East Hampton, Goes West By Dan Koontz First people raised a fuss about them in East Hampton. “It’s not acceptable,” cried Deputy Mayor Barbara Borsack. Dejectedly, they moved on. “We’ve been vindicated,” exulted East Hampton Mayor Rickenbach. They sought refuge in Southampton. Southampton Town’s citizenry, sharpening pitchforks, shouted for an injunction from the highest court. But at the high court, where cooler heads prevail, the injunction was denied. And so the residents of Southampton have been forced, for now, to abide the strangers in their midst. Town Attorney Tiffany Scarlato said about the denied injunction, “it happens” sometimes, but added ominously, “we will continue to monitor them for the rest of the summer.” By now, you have realized that I am telling the story of the Gilt City Hampton House. Gilt City is an online lifestyle retailer that gives members the opportunity to purchase posh goods or eat luxury restaurant meals at a discount. For example, at times you can log onto the Gilt City website and get a $50 credit for $100 worth of expensive Strong Boalt swimwear, or a $79 dinner for two at the Bistro de la Gare on Hudson Street in New York City. Offers come and go quickly, and are dominated by top-shelf items. The Hampton House is Gilt City’s latest

venture out here, running through September 5. At first, Gilt City tried to locate the House in East Hampton, but were chased off by a threatened injunction. They moved it to Southampton Town, and are currently occupying two houses, one on Scuttlehole and the other on Deerfield. The whole affair has caused a stir because the Hampton House promises to draw hordes of people to residential neighborhoods for a non-stop series of events. Why would these hordes come? Because they have paid hundreds of dollars per event (or $1,500 for an all access pass), giving them access to REAL HAMPTONS CELEBRITIES.

Here is just a sampling of the events taking place: A yogathon with hip-hop producer Russell Simmons, surfing with chef Katie Lee (Billy Joel’s ex) plus a picnic from Mexicue, sushi poolside party from Nobu, Godiva chocolate lounge, and various dinners with celebrity chefs from all over. Before rolling our eyes or dismissing this as more evidence of the coming apocalypse, let’s try to be understanding. So many people visit the Hamptons, clogging the roads and trolling the sidewalks in the hope of catching a glimpse of some celebrity. They spend a lot of money, but, like any tourist, they really don’t have anywhere to go. Most of the time, they walk around aimlessly for awhile and then leave, not having seen anyone they recognize and with no story to tell. It’s hard not to see this as a waste of money and precious fuel. The Gilt City Hampton House solves this problem. Now the celebrity-mad can buy their ticket and go to the Hampton House, and sure enough, they will encounter a celebrity. (Maybe just a celebrity chef, but so many of them are on TV now, so they’ll do.) The placement of the Hampton House in a residential neighborhood means that the celebrity-chaser’s cars will be kept away from our Main Streets. So, while we may not approve of the motivation, we can agree that it’s much more efficient. And at the risk of incurring the wrath of the Southampton Town Board, I say we should welcome the Hampton House.

fUll-TImE coNSolE. paRT-TImE DINNER paRTy. 17” DEEp WhEN cloSED aND 115” loNG WhEN fUlly opEN. goliath is in stock for immediate delivery in White, Wenge and grey oak. SEE oUR WEbSITE foR maNy moRE SpacE-TRaNSfoRmING SolUTIoNS.