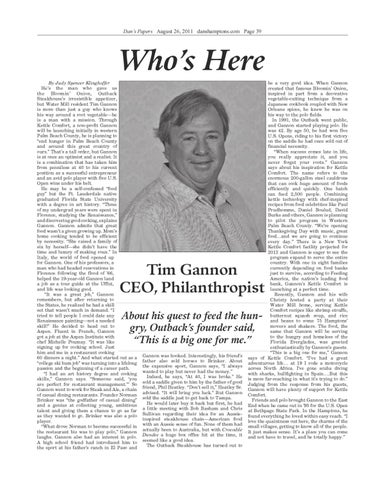 Who’s Here By Judy Spencer Klinghoffer He’s the man who gave us the Bloomin’ Onion, Outback Steakhouse’s irresistible appetizer, but Water Mill resident Tim Gannon is more than just a guy who knows his way around a root vegetable—he is a man with a mission. Through Kettle Comfort, a non-profit Gannon will be launching initially in western Palm Beach County, he is planning to “end hunger in Palm Beach County and around this great country of ours.” That’s a tall order, but Gannon is at once an optimist and a realist. It is a combination that has taken him from penniless at 40 to his current position as a successful entrepreneur and an avid polo player with five U.S. Open wins under his belt. He may be a self-confessed “food guy” but the Ft. Lauderdale native graduated Florida State University with a degree in art history. “Three of my undergrad years were spent in Florence, studying the Renaissance,” and discovering good cooking, explains Gannon. Gannon admits that great food wasn’t a given growing up. Mom’s home cooking tended to be efficient by necessity. “She raised a family of six by herself—she didn’t have the time and luxury of making roux.” In Italy, the world of food opened up for Gannon. One of his professors, a man who had headed renovations in Florence following the flood of ’66, helped the 19-year-old Gannon land a job as a tour guide at the Uffizi, and life was looking good. “It was a great job,” Gannon remembers, but after returning to the States, he realized he had a skill set that wasn’t much in demand. “I tried to tell people I could date any Renaissance painting—not a needed skill!” He decided to head out to Aspen. Fluent in French, Gannon got a job at the Aspen Institute with chef Michelle Poumay. “It was like signing up for cooking school. Just him and me in a restaurant cooking 60 dinners a night.” And what started out as a “college ski bum job” was turning into a lifelong passion and the beginning of a career path. “I had an art history degree and cooking skills,” Gannon says. “Someone said, ‘you are perfect for restaurant management.’” So Gannon went to work for Steak and Ale, a chain of casual dining restaurants. Founder Norman Brinker was “the godfather of casual dining” and a genius at collecting young, ambitious talent and giving them a chance to go as far as they wanted to go. Brinker was also a polo player. “What drove Norman to become successful in the restaurant biz was to play polo,” Gannon laughs. Gannon also had an interest in polo. A high school friend had introduced him to the sport at his father’s ranch in El Paso and

be a very good idea. When Gannon created that famous Bloomin’ Onion, inspired in part from a decorative vegetable-cutting technique from a Japanese cookbook coupled with New Orleans spices, he knew he was on his way to the polo fields. In 1991, the Outback went public, and Gannon started playing polo. He was 42. By age 50, he had won five U.S. Opens, riding to his first victory on the saddle he had once sold out of financial necessity. “When success comes late in life, you really appreciate it, and you never forget your roots.” Gannon says about his inspiration for Kettle Comfort. The name refers to the enormous 200-gallon steel cauldrons that can cook huge amount of foods efficiently and quickly. One batch can feed 2,500 people. Combining kettle technology with chef-inspired recipes from food celebrities like Paul Prudhomme, Daniel Boulud, David Burke and others, Gannon is planning to pilot the program in Western Palm Beach County. “We’re opening Thanksgiving Day with music, great food…and we are going to continue every day.” There is a New York Kettle Comfort facility projected for 2013 and Gannon is eager to see the program expand to serve the entire country. With one in eight families currently depending on food banks just to survive, according to Feeding America, the nation’s leading food bank, Gannon’s Kettle Comfort is launching at a perfect time. Recently, Gannon and his wife Christy hosted a party at their Water Mill home, serving Kettle Comfort recipes like shrimp etouffe, butternut squash soup, and rice and beans to some 75 Hamptons’ movers and shakers. The food, the same that Gannon will be serving to the hungry and homeless of the Florida Everglades, was greeted enthusiastically by Gannon’s guests. “This is a big one for me,” Gannon says of Kettle Comfort. “I’ve had a great adventurous life… at 19 I rode a motorcycle across North Africa. I’ve gone scuba diving with sharks, bullfighting in Spain….But this is more far-reaching in what it’s trying to do.” Judging from the response from his guests, Gannon will have plenty of support for Kettle Comfort. Friends and polo brought Gannon to the East End when he came out in ’95 for the U.S. Open at Bethpage State Park. In the Hamptons, he found everything he loved within easy reach. “I love the quaintness out here, the charms of the small villages, getting to know all of the people. It just makes sense. It’s a place you can come and not have to travel, and be totally happy.”

Tim Gannon CEO, Philanthropist About his quest to feed the hungry, Outback’s founder said, “This is a big one for me.” Gannon was hooked. Interestingly, his friend’s father also sold horses to Brinker. About the expensive sport, Gannon says, “I always wanted to play but never had the money.” Indeed, he says, “At 40, I was broke.” He sold a saddle given to him by the father of good friend, Phil Heatley. “Don’t sell it,” Heatley Sr. advised. “It will bring you luck.” But Gannon sold the saddle just to get back to Tampa. He would later buy it back but first, he had a little meeting with Bob Basham and Chris Sullivan regarding their idea for an Aussieinspired steakhouse chain—American food with an Aussie sense of fun. None of them had actually been to Australia, but with Crocodile Dundee a huge box office hit at the time, it seemed like a good idea. The Outback Steakhouse has turned out to