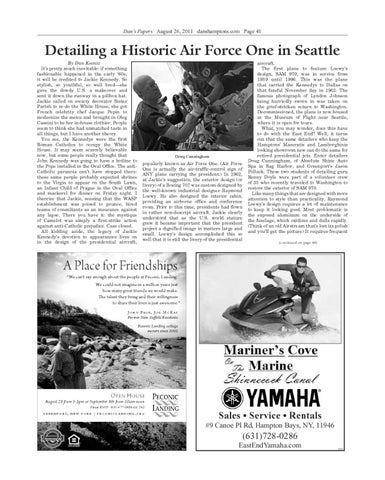 Detailing a Historic Air Force One in Seattle By Dan Koontz It’s pretty much inevitable: if something fashionable happened in the early ‘60s, it will be credited to Jackie Kennedy. So stylish, so youthful, so well bred—she gave the dowdy U.S. a makeover and sent it down the runway in a pillbox hat. Jackie called on society decorator Sister Parish to re-do the White House, she got French celebrity chef Jacque Pepin to modernize the menu and brought in Oleg Cassini to be her in-house clothier. People seem to think she had unmatched taste in all things, but I have another theory. You see, the Kennedys were the first Roman Catholics to occupy the White House. It may seem scarcely believable now, but some people really thought that John Kennedy was going to have a hotline to the Pope installed in the Oval Office. The antiCatholic paranoia can’t have stopped there: these same people probably expected shrines to the Virgin to appear on the South Lawn, an Infant Child of Prague in the Oval Office and mackerel for dinner on Friday night. I theorize that Jackie, sensing that the WASP establishment was poised to pounce, hired teams of consultants as an insurance against any lapse. There you have it: the mystique of Camelot was simply a first-strike action against anti-Catholic prejudice. Case closed. All kidding aside, the legacy of Jackie Kennedy’s devotion to appearances lives on in the design of the presidential aircraft, DP_Jeff-John8-23_Layout 1 8/23/11 4:59 PM Page 1

popularly known as Air Force One. (Air Force One is actually the air-traffic-control sign of ANY plane carrying the president.) In 1962, at Jackie’s suggestion, the exterior design (or livery) of a Boeing 707 was custom designed by the well-known industrial designer Raymond Loewy. He also designed the interior cabin, providing an airborne office and conference room. Prior to this time, presidents had flown in rather non-descript aircraft. Jackie clearly understood that as the U.S. world stature grew it became important that the president project a dignified image in matters large and small. Loewy’s design accomplished this so well that it is still the livery of the presidential

aircraft. The first plane to feature Loewy’s design, SAM 970, was in service from 1959 until 1996. This was the plane that carried the Kennedys to Dallas on that fateful November day in 1963. The famous photograph of Lyndon Johnson being hurriedly sworn in was taken on the grief-stricken return to Washington. Decommissioned, the plane is now housed at the Museum of Flight near Seattle, where it is open for tours. What, you may wonder, does this have to do with the East End? Well, it turns out that the same detailers who keep the Hamptons’ Maseratis and Lamborghinis looking showroom new can do the same for retired presidential jets. Enter detailers Doug Cunningham, of Absolute Shine Auto Spa in Sag Harbor, and Greenport’s Jason Pollack. These two students of detailing guru Renny Doyle were part of a volunteer crew of 35 who recently traveled to Washington to restore the exterior of SAM 970. Like many things that are designed with more attention to style than practicality, Raymond Loewy’s design requires a lot of maintenance to keep it looking good. Most problematic is the exposed aluminum on the underside of the fuselage, which oxidizes and dulls rapidly. (Think of an old Airstream that’s lost its polish and you’ll get the picture) It requires frequent (continued on page 44)

A Place for Friendships

“We can’t say enough about the people at Peconic Landing. We could not imagine in a million years just how many great friends we would make. The talent they bring and their willingness to share their lives is just awesome. ” J O H N P A G E , J O E M C K AY Former New Suﬀolk Residents Peconic Landing cottage owners since 2002