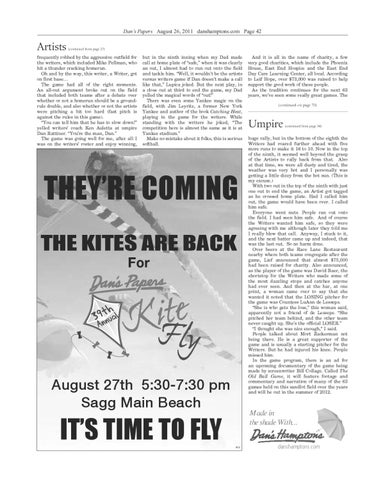 frequently robbed by the aggressive outfield for the writers, which included Mike Pellman, who hit a thunder cracking homerun. Oh and by the way, this writer, a Writer, got on first base… The game had all of the right moments. An all-out argument broke out on the field that included both teams after a debate over whether or not a homerun should be a groundrule double, and also whether or not the artists were pitching a bit too hard (fast pitch is against the rules in this game). “You can tell him that he has to slow down!” yelled writers’ coach Ken Auletta at umpire Dan Rattiner. “You’re the man, Dan.” The game was going well for me, after all I was on the writers’ roster and enjoy winning,

but in the ninth inning when my Dad made call at home plate of “safe,” when it was clearly an out, I almost had to run out onto the field and tackle him. “Well, it wouldn’t be the artists versus writers game if Dan doesn’t make a call like that,” Lupica joked. But the next play, in a close out at third to end the game, my Dad yelled the magical words of “out!” There was even some Yankee magic on the field, with Jim Leyritz, a former New York Yankee and author of the book Catching Heat, playing in the game for the writers. While standing with the writers he joked, “The competition here is almost the same as it is at Yankee stadium.” Make no mistake about it folks, this is serious softball.

THEY’RE COMING THE KITES ARE BACK For

And it is all in the name of charity, a few very good charities, which include the Phoenix House, East End Hospice and the East End Day Care Learning Center, all local. According to Leif Hope, over $73,000 was raised to help support the good work of these people. As the tradition continues for the next 63 years, we’ve seen some really great games. The (continued on page 70)

huge rally, but in the bottom of the eighth the Writers had roared further ahead with five more runs to make it 16 to 10. Now in the top of the ninth, it seemed well beyond the grasp of the Artists to rally back from that. Also at that time, we were all dusty and tired, the weather was very hot and I personally was getting a little dizzy from the hot sun. (This is my excuse.) With two out in the top of the ninth with just one out to end the game, an Artist got tagged as he crossed home plate. Had I called him out, the game would have been over. I called him safe. Everyone went nuts. People ran out onto the field. I had seen him safe. And of course the Writers wanted him safe, so they were agreeing with me although later they told me I really blew that call. Anyway, I stuck to it, and the next batter came up and indeed, that was the last out. So no harm done. Over beers at the Race Lane Restaurant nearby where both teams congregate after the game, Lief announced that almost $75,000 had been raised for charity. Also announced, as the player of the game was David Baer, the shortstop for the Writers who made some of the most dazzling stops and catches anyone had ever seen. And then at the bar, at one point, a woman came over to say that she wanted it noted that the LOSING pitcher for the game was Countess LuAnn de Lesseps. “She is who gets the loss,” this woman said, apparently not a friend of de Lesseps. “She pitched her team behind, and the other team never caught up. She’s the official LOSER.” “I thought she was nice enough,” I said. People talked about Mort Zuckerman not being there. He is a great supporter of the game and is usually a starting pitcher for the Writers. But he had injured his knee. People missed him. In the game program, there is an ad for an upcoming documentary of the game being made by screenwriter Bill Collage. Called The Old Ball Game, it will feature footage and commentary and narration of many of the 63 games held on this sandlot field over the years and will be out in the summer of 2012.

Made in the shade With...