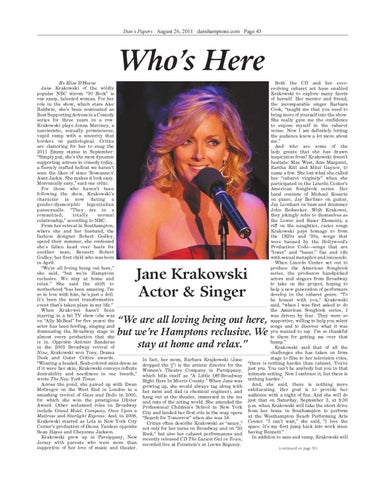 Who’s Here By Elise D’Haene Jane Krakowski of the wildly popular NBC sitcom “30 Rock” is one sassy, talented woman. For her role in the show, which stars Alec Baldwin, she’s been nominated as Best Supporting Actress in a Comedy series for three years in a row. Krakowski plays Jenna Maroney, a narcissistic, sexually promiscuous, vapid vamp with a sincerity that borders on pathological. Critics are clamoring for her to snag the 2011 Emmy statue in September: “Simply put, she’s the most dynamic supporting actress in comedy today, a fiercely crafted hellcat we haven’t seen the likes of since ‘Roseanne’s’ Aunt Jackie. She makes it look easy. Moronically easy,” said one critic. For those who haven’t been following the show, Krakowski’s character is now dating a gender-dysmorphic bigenitalian pansexualle. “They are in a committed, totally normal relationship,” according to NBC. From her retreat in Southampton, where she and her husband, the fashion designer Robert Godley, spend their summer, she confessed she’s fallen head over heels for another man, Bennett Robert Godley, her first child who was born in April. “We’re all loving being out here,” she said, “but we’re Hamptons reclusive. We stay at home and relax.” She said the shift to motherhood “has been amazing. I’m so in love with him, he’s just a doll. It’s been the most transformative event that’s taken place in my life.” When Krakowsi hasn’t been starring in a hit TV show (she was on “Ally McBeal” for five years) the actor has been hoofing, singing and dominating the Broadway stage in almost every production that she is in. Opposite Antonio Banderas in the 2003 Broadway revival of Nine, Krakowski won Tony, Drama Desk and Outer Critics awards. “Wearing a beaded, flesh-colored mini-dress as if it were her skin, Krakowski conveys infinite desirability and neediness in one breath,” wrote The New York Times. Across the pond, she paired up with Ewan McGregor on the West End in London in a smashing revival of Guys and Dolls in 2005, for which she won the prestigious Olivier Award. Other acclaimed roles on Broadway include Grand Hotel, Company, Once Upon a Mattress and Starlight Express. And, in 2008, Krakowski starred as Lola in New York City Center’s production of Damn Yankees opposite Sean Hayes and Cheyenne Jackson. Krakowski grew up in Parsippany, New Jersey with parents who were more than supportive of her love of music and theater.

Both the CD and her everevolving cabaret act have enabled Krakowski to explore many facets of herself. Her mentor and friend, the incomparable singer Barbara Cook, “taught me that you need to bring more of yourself into the show. She really gave me the confidence to expose myself in the cabaret venue. Now I am definitely letting the audience know a lot more about me.” And who are some of the lady greats that she has drawn inspiration from? Krakowski doesn’t hesitate: Mae West, Ann Margaret, Eartha Kitt and Mitzi Gaynor, to name a few. She lost what she called her “cabaret virginity” when she participated in the Lincoln Center’s American Songbook series. Her band consists of Michael Kosarin on piano, Jay Berliner on guitar, Jay Leonhart on bass and drummer John Redsecker. With Krakowsi, they jokingly refer to themselves as the Lower and Baser Elements, a riff on the naughtier, racier songs Krakowski pays homage to from the 1920s and ‘30s, songs that were banned by the Hollywood’s Production Code—songs that are “lower” and “baser,” fun and rife with sexual metaphor and innuendo. When Lincoln Center set out to produce the American Songbook series, the producers handpicked actors and singers from Broadway to take on the project, hoping to help a new generation of performers develop in the cabaret genre. “To be honest with you,” Krakowski said, “when I was first asked to do the American Songbook series, I was driven by fear. They were so supportive, willing to help you select songs and to discover what it was you wanted to say. I’m so thankful to them for getting me over that hump.” Krakowski said that of all the challenges she has taken on from stage to film to her television roles, “there is nothing harder than cabaret. You’re just you. You can’t be anybody but you in that intimate setting. Now I embrace it, but there is nothing harder.” And, she said, there is nothing more exhilarating. Her goal is to provide her audience with a night of fun. And she will do just that on Saturday, September 3, at 8:30 p.m. when Krakowski will take the short drive from her home in Southampton to perform at the Westhampton Beach Performing Arts Center. “I can’t wait,” she said, “I love the space. It’s my first jump back into work since having Bennett.” In addition to sass and vamp, Krakowski will

“We are all loving being out here, but we’re Hamptons reclusive. We stay at home and relax.” In fact, her mom, Barbara Krajkowski (Jane dropped the ‘j”) is the artistic director for the Women’s Theatre Company in Parsippany, which bills itself as “A Little Off-Broadway Right Here In Morris County.” When Jane was growing up, she would always tag along with her mom and dad (a chemical engineer), and hang out at the theater, immersed in the ins and outs of the acting world. She attended the Professional Children’s School in New York City and landed her first role in the soap opera “Search for Tomorrow” when she was 16. Critics often describe Krakowski as “saucy,” not only for her turns on Broadway and on “30 Rock,” but also her cabaret performances and recently released CD The Laziest Gal in Town, recorded live at Feinstein’s at Loews Regency.