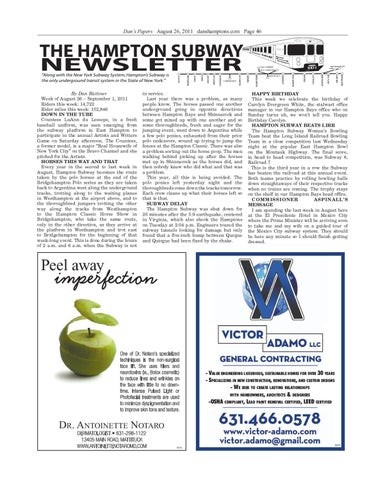 By Dan Rattiner Week of August 26 – September 1, 2011 Riders this week: 14,722 Rider miles this week: 152,846 DOWN IN THE TUBE Countess LuAnn du Lesseps, in a fresh baseball uniform, was seen emerging from the subway platform in East Hampton to participate in the annual Artists and Writers Game on Saturday afternoon. The Countess, a former model, is a major “Real Housewife of New York City” on the Bravo Channel and she pitched for the Artists. HORSES THIS WAY AND THAT Every year in the second to last week in August, Hampton Subway becomes the route taken by the polo horses at the end of the Bridgehampton Polo series as they are taken back to Argentina west along the underground tracks, trotting along to the waiting planes in Westhampton at the airport above, and to the thoroughbred jumpers trotting the other way along the tracks from Westhampton to the Hampton Classic Horse Show in Bridgehampton, who take the same route, only in the other direction, as they arrive at the platform in Westhampton and trot east to Bridgehampton for the beginning of that week-long event. This is done during the hours of 2 a.m. and 6 a.m. when the Subway is not

in service. Last year there was a problem, as many people know. The horses passed one another underground going in opposite directions between Hampton Bays and Shinnecock and some got mixed up with one another and so some thoroughbreds, fresh and eager for the jumping event, went down to Argentina while a few polo ponies, exhausted from their prior polo endeavors, wound up trying to jump the fences at the Hampton Classic. There was also a problem sorting out the horse poop. The men walking behind picking up after the horses met up in Shinnecock as the horses did, and then nobody knew who did what and that was a problem. This year, all this is being avoided. The polo ponies left yesterday night and the thoroughbreds come down the tracks tomorrow. Each crew cleans up what their horses left so that is that. SUBWAY DELAY The Hampton Subway was shut down for 20 minutes after the 5.9 earthquake, centered in Virginia, which also shook the Hamptons on Tuesday at 2:04 p.m. Engineers toured the subway tunnels looking for damage but only found that a five-inch bump between Quogue and Quiogue had been fixed by the shake.

HAPPY BIRTHDAY This week we celebrate the birthday of Carolyn Evergreen White, the stalwart office manager in our Hampton Bays office who on Sunday turns uh, we won’t tell you. Happy Birthday Carolyn. HAMPTON SUBWAY BEATS LIRR The Hampton Subway Women’s Bowling Team beat the Long Island Railroad Bowling Team in a close competition last Wednesday night at the popular East Hampton Bowl on the Montauk Highway. The final score, in head to head competition, was Subway 8, Railroad 7 . This is the third year in a row the Subway has beaten the railroad at this annual event. Both teams practice by rolling bowling balls down straightaways of their respective tracks when no trains are coming. The trophy stays on the shelf in our Hampton Bays head office. COMMISSIONER ASPINALL’S MESSAGE I am spending the last week in August here at the El Presidente Hotel in Mexico City where the Prime Minister will be arriving soon to take me and my wife on a guided tour of the Mexico City subway system. They should be here any minute so I should finish getting dressed.

one of Dr. notaro’s specialized techiniques is the non-surgical face lift. she uses fillers and neurotoxins (ie., Botox cosmetic) to reduce lines and wrinkles on the face with little to no downtime. intense Pulsed light or Photofacial treatments are used to minimize dyspigmentation and to improve skin tone and texture.