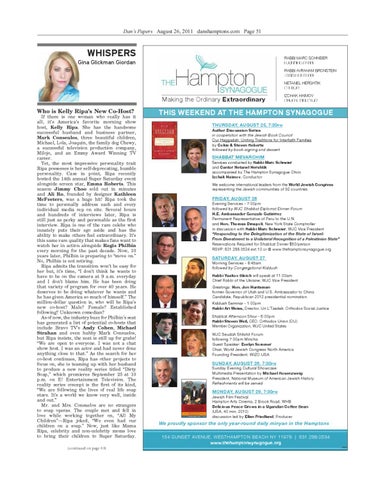 Making the Ordinary,_[YHVYKPUHY` Who is Kelly Ripa’s New Co-Host?

If there is one woman who really has it all, it’s America’s favorite morning show host, Kelly Ripa. She has the handsome successful husband and business partner, Mark Conseulos, three beautiful children, Michael, Lola, Joaquin, the family dog Chewy, a successful television production company, Milojo, and an Emmy Award Winning TV career. Yet, the most impressive personality trait Ripa possesses is her self-deprecating, humble personality. Case in point, Ripa recently hosted the 14th annual Super Saturday event alongside screen star, Emma Roberts. This season Jimmy Choo sold out in minutes and Ali Ro, founded by designer Kathleen McFeeters, was a huge hit! Ripa took the time to personally address each and every individual media rep on site. Several hours and hundreds of interviews later, Ripa is still just as perky and personable as the first interview. Ripa is one of the rare celebs who innately puts their ego aside and has the ability to make others feel extraordinary. It’s this same rare quality that makes fans want to watch her in action alongside Regis Philbin every morning for the past decade. Now, 10 years later, Philbin is preparing to “move on.” No, Philbin is not retiring. Ripa admits the transition won’t be easy for her but, it’s time, “I don’t think he wants to have to be on the camera at 9 a.m. everyday and I don’t blame him. He has been doing that variety of program for over 40 years. He deserves to be doing whatever he wants and he has given America so much of himself.” The million-dollar question is, who will be Ripa’s new co-host? Male? Female? Established following? Unknown comedian? As of now, the industry buzz for Philbin’s seat has generated a list of potential co-hosts that include Bravo TV’s Andy Cohen, Michael Strahan and even hubby Mark Consuelos, but Ripa insists, the seat is still up for grabs! “We are open to everyone. I was not a chat show host. I was an actor and had never done anything close to that.” As the search for her co-host continues, Ripa has other projects to focus on, she is teaming up with her husband to produce a new reality series titled “Dirty Soap,” which premieres September 25 at 10 p.m. on E! Entertainment Television. The reality series concept is the first of its kind, “We are following the lives of real life soap stars. It’s a world we know very well, inside and out.” Mr. and Mrs. Consuelos are no strangers to soap operas. The couple met and fell in love while working together on, “All My Children”—Ripa joked, “We even had our children on a soap.” Now, just like Mama Ripa, celebrity and non-celebrity moms love to bring their children to Super Saturday. (continued on page 69)

(\[OVY+PZJ\ZZPVU:LYPLZ in cooperation with the Jewish Book Council Our Haggadah: Uniting Traditions for Interfaith Families by *VRPL :[L]LU9VILY[Z followed by book-signing and dessert

Services conducted by 9HIIP4HYJ:JOULPLY and*HU[VY5L[HULS/LYZO[PR accompanied by The Hampton Synagogue Choir, 0aJOHR/HPTV], Conductor We welcome international leaders from the >VYSK1L^PZO*VUNYLZZ representing the Jewish communities of 92 countries

Evening Services - 7:00pm followed by WJC Shabbat Diplomat Dinner Forum /,(TIHZZHKVY.VUaHSV.\[PtYYLa Permanent Representative of Peru to the U.N. and /VU;OVTHZ+PUHWVSP, New York State Comptroller in discussion with 9HIIP4HYJ:JOULPLY, WJC Vice President “Responding to the Delegitimization of the State of Israel: From Divestment to a Unilateral Recognition of a Palestinian State” Reservations Required for Shabbat Dinner $50/person RSVP: 631.288.0534 ext.10 or @ www.thehamptonsynagogue.org

Morning Services - 8:45am followed by Congregational Kiddush 9HIIP@HHRV])SLPJO will speak at 11:00am Chief Rabbi of the Ukraine; WJC Vice President