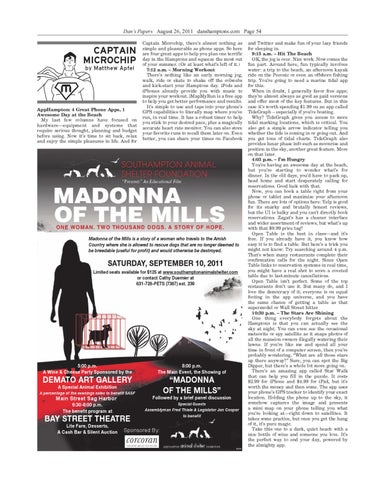 M AppHampton: 4 Great Phone Apps, 1 Awesome Day at the Beach My last few columns have focused on hardware—equipment and systems that require serious thought, planning and budget before using. Now it’s time to sit back, relax and enjoy the simple pleasures in life. And for

Captain Microchip, there’s almost nothing as simple and pleasurable as phone apps. So here are four great apps to help you plan one terrific day in the Hamptons and squeeze the most out of your summer. (Or at least what’s left of it.) 7:12 a.m. – Morning Workout There’s nothing like an early morning jog, walk, ride or skate to shake off the cobwebs and kick-start your Hamptons day. iPods and iPhones already provide you with music to inspire your workout. iMapMyRun is a free app to help you get better performance and results. It’s simple to use and taps into your phone’s GPS capabilities to literally map where you’ve run, in real time. It has a robust timer to help you stick to your desired pace, plus a magically accurate heart rate monitor. You can also store your favorite runs to recall them later on. Even better, you can share your times on Facebook

Madonna of the Mills is a story of a woman who travels to the Amish Country where she is allowed to rescue dogs that are no longer deemed to be breedable (useful for profit) and would otherwise be destroyed.

“MADONNA OF THE MILLS”

A percentage of the evenings sales to benefit SASF

and Twitter and make fun of your lazy friends for sleeping in. 9:15 a.m. – Hit The Beach OK, the jog is over. Nice work. Now comes the fun part. Around here, fun typically involves water: a trip to the beach, an afternoon kayak ride on the Peconic or even an offshore fishing trip. You’re going to need a marine tidal app for this. When in doubt, I generally favor free apps; they’re almost always as good as paid versions and offer most of the key features. But in this case it’s worth spending $1.99 on an app called TideGraph – especially if you’re boating. Why? TideGraph gives you access to more tidal marking locations, which is critical. You also get a simple arrow indicator telling you whether the tide is coming in or going out. And you get tons of tidal charts. TideGraph also provides lunar phase info such as moonrise and position in the sky, another great feature. More on that later. 4:03 p.m. – I’m Hungry You’re having an awesome day at the beach, but you’re starting to wonder what’s for dinner. In the old days, you’d have to pack up, head home and start desperately calling for reservations. Good luck with that. Now, you can book a table right from your phone or tablet and maximize your afternoon fun. There are lots of options here: Yelp is good for its snarky and brutally honest reviews, but the UI is balky and you can’t directly book reservations. Zagat’s has a cleaner interface and wider assortment of reviews, but what’s up with that $9.99 price tag? Open Table is the best in class—and it’s free. If you already have it, you know how easy it is to find a table. But here’s a trick you might not know: Try searching around 4 p.m. That’s when many restaurants complete their confirmation calls for the night. Since Open Table links to reservation systems in real time, you might have a real shot to score a coveted table due to last-minute cancellations. Open Table isn’t perfect. Some of the top restaurants don’t use it. But many do, and I love the democracy of it; everyone is on equal footing in the app universe, and you have the same chance of getting a table as that supermodel or Wall Street hitter. 10:30 p.m. – The Stars Are Shining One thing everybody forgets about the Hamptons is that you can actually see the sky at night. You can even see the occasional meteorite or spy satellite as it snaps photos of all the mansion owners illegally watering their lawns. If you’re like me and spend all your time in front of a computer screen, then you’re probably wondering, “What are all those stars up there anyway?” Sure, you can spot the Big Dipper, but there’s a whole lot more going on. There’s an amazing app called Star Walk that can help you fill in the puzzle. It costs $2.99 for iPhone and $4.99 for iPad, but it’s worth the money and then some. The app uses your phone’s GPS tracker to identify your exact location. Holding the phone up to the sky, it somehow captures the image and presents a mini map on your phone telling you what you’re looking at—right down to satellites. It takes some practice, but once you get the hang of it, it’s pure magic. Take this one to a dark, quiet beach with a nice bottle of wine and someone you love. It’s the perfect way to end your day, powered by the almighty app.