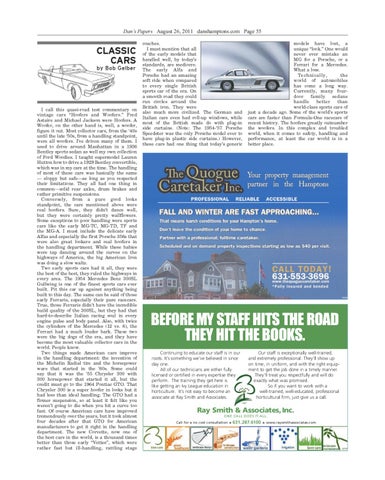 I call this quasi-road test commentary on vintage cars “Hoofers and Woofers.” Fred Astaire and Michael Jackson were Hoofers. A Woofer, on the other hand is, well, a woofer, figure it out. Most collector cars, from the ‘40s until the late ‘50s, from a handling standpoint, were all woofers. I’ve driven many of them. I used to drive around Manhattan in a 1936 Bentley sports sedan as well my own collection of Ford Woodies. I taught supermodel Lauren Hutton how to drive a 1929 Bentley convertible, which was in my care at the time. The handling of most of these cars was basically the same — sloppy but safe—as long as you respected their limitations. They all had one thing in common—solid rear axles, drum brakes and rather primitive suspensions. Conversely, from a pure good looks standpoint, the cars mentioned above were real hoofers. Sure, they didn’t dance well, but they were certainly pretty wallflowers. Some exceptions to poor handling were sports cars like the early MG-TC, MG-TD, TF and the MG-A. I must include the delicate early Alfas and especially the first Porsche 356s that were also great lookers and real hoofers in the handling department. While these babies were tap dancing around the curves on the highways of America, the big American Iron was doing a slow waltz. Two early sports cars had it all, they were the best of the best, they ruled the highways in every area. The 1954 Mercedes Benz 300SL Gullwing is one of the finest sports cars ever built. Pit this car up against anything being built to this day. The same can be said of those early Ferraris, especially their pure racecars. True, those Ferraris didn’t have the incredible build quality of the 300SL, but they had that hard-to-describe Italian racing soul in every engine pulse and body panel. Also, with twice the cylinders of the Mercedes (12 vs. 6), the Ferrari had a much louder bark. These two were the big dogs of the era, and they have become the most valuable collector cars in the world. People know. Two things made American cars improve in the handling department: the invention of the Michelin Radial tire and the horsepower wars that started in the ’60s. Some could say that it was the ‘55 Chrysler 300 with 300 horsepower that started it all, but the credit must go to the 1964 Pontiac GTO. That Chrysler 300 is a super hoofer in looks but it had less than ideal handling. The GTO had a firmer suspension, so at least it felt like you weren’t going to die when you hit a curve too fast. Of course American cars have improved tremendously over the years, but it took almost four decades after that GTO for American manufacturers to get it right in the handling department. The new Corvette, now one of the best cars in the world, is a thousand times better than those early “Vettes”, which were rather fast but ill-handling, rattling stage

coaches. I must mention that all of the early models that handled well, by today’s standards, are mediocre. The early Alfa and Porsche had an amazing soft ride when compared to every single British sports car of the era. On a smooth road they could run circles around the British iron. They were also much more civilized. The German and Italian cars even had roll-up windows, while most of the British made do with plug-in side curtains. (Note: The 1954-‘57 Porsche Speedster was the only Porsche model ever to have plug-in plastic side curtains.) However, these cars had one thing that today’s generic

models have lost, a unique “look.” One would never ever mistake an MG for a Porsche, or a Ferrari for a Mercedes. What a loss. Technically, the world of automobiles has come a long way. Currently, many fourdoor family sedans handle better than world-class sports cars of just a decade ago. Some of the world’s sports cars are faster than Formula-One racecars of recent history. The hoofers greatly outnumber the woofers. In this complex and troubled world, when it comes to safety, handling and performance, at least the car world is in a better place.

BEFORE MY STAFF HITS THE ROAD THEY HIT THE BOOKS. Continuing to educate our staff is in our roots. It’s something we’ve believed in since day one. All of our technicians are either fully licensed or certified in every expertise they perform. The training they get here is like getting an Ivy League education in horticulture. It’s not easy to become an associate at Ray Smith and Associates.

Our staff is exceptionally well-trained, and extremely professional. They’ll show up on time, in uniform, and with the right equipment to get the job done in a timely manner. They’ll treat you respectfully and will do exactly what was promised. So if you want to work with a well-trained, well-educated, professional horticultural firm, just give us a call.

Ray Smith & Associates,Inc. ONE CALL DOES IT ALL.

Call for a no cost consultation