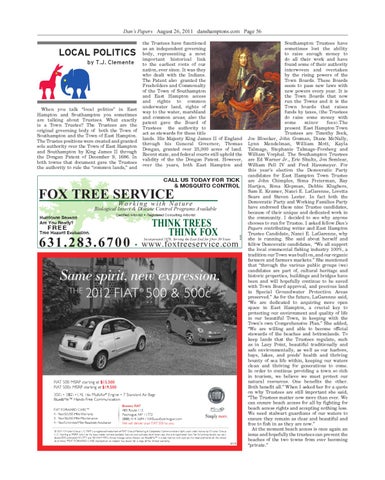 the Trustees have functioned as an independent governing body, representing a most important historical link to the earliest roots of our nation, ever since. It was they who dealt with the Indians. The Patent also granted the Freeholders and Commonalty of the Town of Southampton and East Hampton access and rights to common underwater land, rights of way to the water, marshland and common areas; also the patent gave the Board of Trustees  the authority to act as stewards for these title lands. His Majesty King James II of England through his General Governor, Thomas Dongan, granted over 25,000 acres of land. Recent state, and federal courts still uphold the validity of the the Dongan Patent. However, over the years, both East Hampton and

Incorporated 1976, Serving the East End for Over 30 Years

Hurricane season are you ready?

Southampton Trustees have sometimes lost the ability to raise enough money to do all their work and have found some of their authority interwoven and overtaken by the rising powers of the Town Boards. These Boards seem to pass new laws with new powers every year. It is the Town Boards that now run the Towns and it is the Town boards that raises funds by taxes, (the Trustees do raise some money with some minor fees).The present East Hampton Town Trustees are Timothy Bock, Joe Bloecker, John Gosman, Diane McNally, Lynn Mendelman, William Mott, Kayla Talmage, Stephanie Talmage-Forsberg and William Vorphal. The Southampton Trustees are Ed Warner Jr., Eric Shultz, Jon Semlear, William Pell IV and Fred Havemeyer. For this year’s election the Democratic Party candidates for East Hampton Town Trustee are John Chimples, Sima Freierman, Ray Hartjen, Rona Klopman, Debbie Klughers, Sam E. Kramer, Nanci E. LaGarenne, Loretta Sears and Steven Lester. In fact both the Democratic Party and Working Families Party have endorsed these nine Trustee candidates, because of their unique and dedicated work in the community. I decided to see why anyone chooses to run for Trustee. I asked fellow Dan’s Papers contributing writer and East Hampton Trustee Candidate, Nanci E. LaGarenne, why she is running. She said about herself and fellow Democratic candidates,  “We all support the local commercial fishing industry 100%, a tradition our Town was built on, and our organic farmers and farmers markets.” She mentioned that “through the various public groups (we) candidates are part of, cultural heritage and historic properties, buildings and bridges have been and will hopefully continue to be saved with Town Board approval, and precious land in Special Groundwater Protection Areas preserved.” As for the future, LaGarenne said, “We are dedicated to acquiring more open space in East Hampton, a crucial key to protecting our environment and quality of life in our beautiful Town, in keeping with the Town’s own Comprehensive Plan.” She added, “We are willing and able to become official stewards of the beaches and bottomlands. To keep lands that the Trustees regulate, such as in Lazy Point, beautiful traditionally and safe environmentally, as well as our harbors, bays, lakes, and ponds’ health and thriving bounty of sea life within, keeping our waters clean and thriving for generations to come. In order to continue providing a town so rich in tourism, we believe we must protect our natural resources. One benefits the other. Both benefit all.” When I asked her for a quote on why Trustees are still important she said, “The Trustees matter now more than ever. We can ensure beach access for all by fighting for beach access rights and accepting nothing less. We need stalwart guardians of our waters to ensure they remain as clear and beautiful and free to fish in as they are now.”  At the moment beach access is once again an issue and hopefully the trustees can prevent the beaches of the two towns from ever becoming “private.”