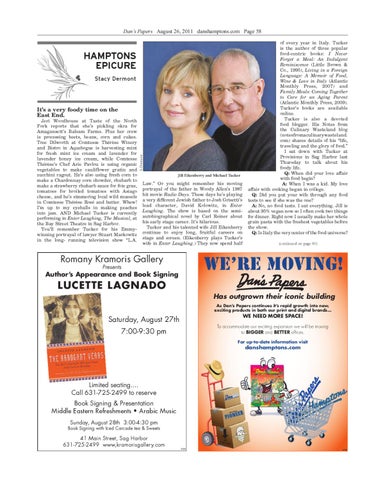 It’s a very foody time on the East End.

Law.” Or you might remember his moving portrayal of the father in Woody Allen’s 1987 hit movie Radio Days. These days he’s playing a very different Jewish father to Josh Grisetti’s lead character, David Kolowitz, in Enter Laughing. The show is based on the semiautobiographical novel by Carl Reiner about his early stage career. It’s hilarious. Tucker and his talented wife Jill Eikenberry continue to enjoy long, fruitful careers on stage and screen. (Eikenberry plays Tucker’s wife in Enter Laughing.) They now spend half

of every year in Italy. Tucker is the author of three popular food-centric books: I Never Forget a Meal: An Indulgent Reminiscence (Little Brown & Co., 1995), Living in a Foreign Language: A Memoir of Food, Wine & Love in Italy (Atlantic Monthly Press, 2007) and Family Meals: Coming Together to Care for an Aging Parent (Atlantic Monthly Press, 2009). Tucker’s books are available online. Tucker is also a devoted food blogger. His Notes from the Culinary Wasteland blog (notesfromaculinarywasteland. com) shares details of his “life, traveling and the glory of food.” I sat down with Tucker at Provisions in Sag Harbor last Thursday to talk about his foody life. Q: When did your love affair with food begin? A: When I was a kid. My love affair with cooking began in college. Q: Did you put your wife through any food tests to see if she was the one? A: No, no food tests. I eat everything. Jill is about 95% vegan now so I often cook two things for dinner. Right now I usually make her whole grain pasta with the freshest vegetables before the show. Q: Is Italy the very center of the food universe? (continued on page 60)

Has outgrown their iconic building As Dan’s Papers continues it’s rapid growth into new, exciting products in both our print and digital brands…

To accommodate our exciting expansion we will be moving to BIGGER and BETTER offices.