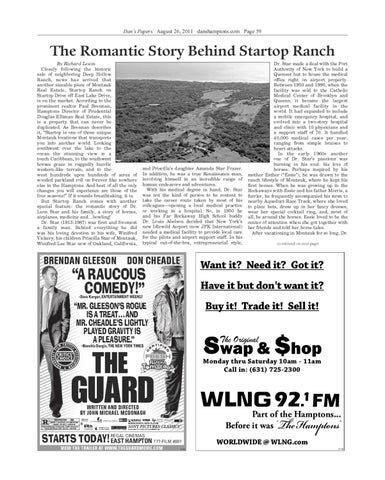 The Romantic Story Behind Startop Ranch By Richard Lewin Closely following the historic sale of neighboring Deep Hollow Ranch, news has arrived that another sizeable piece of Montauk Real Estate, Startop Ranch on Startop Drive off East Lake Drive, is on the market. According to the prominent realtor Paul Brennan, Hamptons Director of Prudential Douglas Elliman Real Estate, this is a property that can never be duplicated. As Brennan describes it, “Startop is one of those unique Montauk locations that transports you into another world. Looking southwest over the lake to the ocean the stunning view is a touch Caribbean, to the southwest horses graze in ruggedly bucolic western-like terrain, and to the west hundreds upon hundreds of acres of wooded parkland roll on forever like nowhere else in the Hamptons. And best of all the only changes you will experience are those of the four seasons!” If it sounds breathtaking, it is. But Startop Ranch comes with another special feature: the romantic story of Dr. Leon Star and his family, a story of horses, airplanes, medicine and…bowling! Dr. Star (1913-1987) was first and foremost a family man. Behind everything he did was his loving devotion to his wife, Winifred Vickery, his children Priscilla Star of Montauk, Winifred Lee Star now of Oakland, California,

and Priscilla’s daughter Amanda Star Frazer. In addition, he was a true Renaissance man, involving himself in an incredible range of human endeavors and adventures. With his medical degree in hand, Dr. Star was not the kind of person to be content to take the career route taken by most of his colleagues—opening a local medical practice or working in a hospital. So, in 1950 he and his Far Rockaway High School buddy Dr. Louis Abelson decided that New York’s new Idlewild Airport (now JFK International) needed a medical facility to provide local care for the pilots and airport support staff. In his typical out-of-the-box, entrepreneurial style,

Dr. Star made a deal with the Port Authority of New York to build a Quonset hut to house the medical office right on airport property. Between 1950 and 1990, when the facility was sold to the Catholic Medical Center of Brooklyn and Queens, it became the largest airport medical facility in the world. It had expanded to include a mobile emergency hospital, and evolved into a two-story hospital and clinic with 10 physicians and a support staff of 70. It handled 40,000 medical cases per year, ranging from simple bruises to heart attacks. In the early 1960s another one of Dr. Star’s passions was burning in his soul: his love of horses. Perhaps inspired by his mother Esther (“Essie”), he was drawn to the ranch lifestyle of Montauk, where he kept his first horses. When he was growing up in the Rockaways with Essie and his father Morris, a furrier, he frequently accompanied his mom to nearby Aqueduct Race Track, where she loved to place bets, dress up in her fancy dresses, wear her special cocktail ring, and, most of all, be around the horses. Essie loved to be the center of attention when she got together with her friends and told her horse tales. After vacationing in Montauk for so long, Dr. (continued on next page)

Have it but don't want it? Publication: DANS PAPERS

VIEW THE TRAILER AT WWW.THEGUARDMOVIE.COM