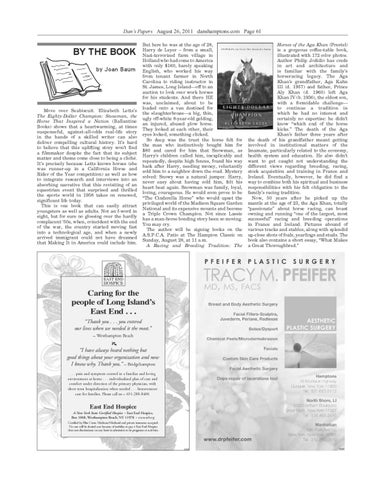 BY THE BOOK by Joan Baum

Move over Seabiscuit. Elizabeth Letts’s The Eighty-Dollar Champion: Snowman, the Horse That Inspired a Nation (Ballantine Books) shows that a heartwarming, at times suspenseful, against-all-odds real-life story in the hands of a skilled writer can also deliver compelling cultural history. It’s hard to believe that this uplifting story won’t find a filmmaker despite the fact that its subject matter and theme come close to being a cliché. It’s precisely because Letts knows horses (she was runner-up in a California Horse and Rider of the Year competition) as well as how to integrate research and interviews into an absorbing narrative that this revisiting of an equestrian event that surprised and thrilled the sports world in 1958 takes on renewed, significant life today. This is one book that can easily attract youngsters as well as adults. Not an f-word in sight, but for sure no glossing over the hardly complacent ‘50s, when, coincident with the end of the war, the country started moving fast into a technological age, and when a newly EEH gen immigrant ad DansPaper4.5x6 5/7/09 AM arrived could not have 11:49 dreamed that Making It in America could include him.

But here he was at the age of 28, Harry de Leyer – from a small, Nazi-terrorized farm village in Holland who had come to America with only $160, barely speaking English, who worked his way from tenant farmer in North Carolina to riding instructor in St. James, Long Island—off to an auction to look over work horses for his students. And there HE was, unclaimed, about to be loaded onto a van destined for the slaughterhouse—a big, thin, ugly off-white 8-year-old gelding, an injured, abused plow horse. They looked at each other, their eyes locked, something clicked. So deep was the trust the horse felt for the man who instinctively bought him for $80 and cared for him that Snowman, as Harry’s children called him, inexplicably and repeatedly, despite high fences, found his way back after Harry, needing money, reluctantly sold him to a neighbor down the road. Mystery solved: Snowy was a natural jumper. Harry, never easy about having sold him, felt his heart beat again. Snowman was family, loyal, loving, courageous. He would soon prove to be “The Cinderella Horse” who would upset the privileged world of the Madison Square Garden National and its expensive mounts and become a Triple Crown Champion. Not since Lassie has a man-horse bonding story been so moving. You may cry. The author will be signing books on the A.S.P.C.A. Patio at The Hampton Classic on Page 1 Sunday, August 28, at 11 a.m. A Racing and Breeding Tradition: The

Horses of the Aga Khan (Prestel) is a gorgeous coffee-table book, illustrated with 172 color photos. Author Philip Jodidio has creds in art and architecture and is familiar with the family’s horseracing legacy. The Aga Khan’s grandfather, Aga Kahn III (d. 1957) and father, Prince Aly Khan (d. 1960) left Aga Khan IV (b. 1936), the eldest son, with a formidable challenge— to continue a tradition in which he had no interest and certainly no expertise: he didn’t know “which end of the horse kicks.” The death of the Aga Khan’s father three years after the death of his grandfather meant getting involved in institutional matters of the Imamate, particularly related to the economy, health system and education. He also didn’t want to get caught not understanding the different views regarding breeding, racing, stock acquisition and training in France and Ireland. Eventually, however, he did find a way to combine both his spiritual and business responsibilities with his felt obligation to the family’s racing tradition. Now, 50 years after he picked up the mantle at the age of 23, the Aga Khan, totally “passionate” about horse racing, can boast owning and running “one of the largest, most successful” racing and breeding operations in France and Ireland. Pictures abound of various tracks and stables, along with splendid up-close shots of foals, yearlings and studs. The book also contains a short essay, “What Makes a Great Thoroughbred.”

Caring for the people of Long Island’s East End . . . “Thank you . . . you entered our lives when we needed it the most.” – Westhampton Beach

“I have always heard nothing but good things about your organization and now I know why. Thank you.” – Bridgehampton . . . pain and symptom control in a familiar and loving environment at home . . . individualized plan of care and comfort under direction of the primary physician, with short term hospitalization when needed . . . bereavement care for families. Please call us – 631-288-8400.

East End Hospice A New York State Certified Hospice • East End Hospice, Box 1048, Westhampton Beach, NY 11978 • www.eeh.org Certified by Blue Cross. Medicare/Medicaid and private insurance accepted. No one will be denied care because of inability to pay. • East End Hospice does not discriminate on any basis in admission to its programs or activities.