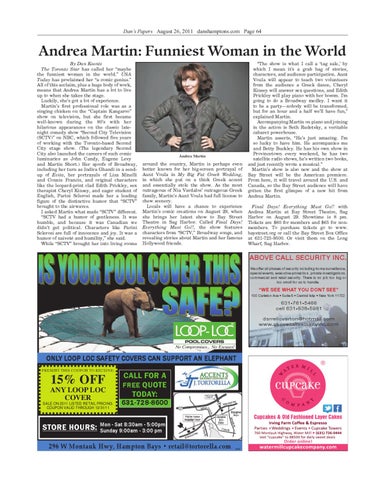 around the country, Martin is perhaps even better known for her big-screen portrayal of Aunt Voula in My Big Fat Greek Wedding, in which she put on a thick Greek accent and essentially stole the show. As the most outrageous of Nia Vardalosâ&#x20AC;&#x2122; outrageous Greek family, Martinâ&#x20AC;&#x2122;s Aunt Voula had full license to chew scenery. Locals will have a chance to experience Martinâ&#x20AC;&#x2122;s comic creations on August 29, when she brings her latest show to Bay Street Theatre in Sag Harbor. Called Final Days! Everything Must Go!!, the show features characters from â&#x20AC;&#x153;SCTV,â&#x20AC;? Broadway songs, and revealing stories about Martin and her famous Hollywood friends.

â&#x20AC;&#x153;The show is what I call a â&#x20AC;&#x2DC;tag sale,â&#x20AC;&#x2122; by which I mean itâ&#x20AC;&#x2122;s a grab bag of stories, characters, and audience participation. Aunt Voula will appear to teach two volunteers from the audience a Greek dance, Cheryl Kinsey will answer sex questions, and Edith Prickley will play piano with her bosom. Iâ&#x20AC;&#x2122;m going to do a Broadway medley. I want it to be a partyâ&#x20AC;&#x201D;nobody will be transformed, but for an hour and a half weâ&#x20AC;&#x2122;ll have fun,â&#x20AC;? explained Martin. Accompanying Martin on piano and joining in the action is Seth Rudetsky, a veritable cabaret powerhouse. Martin asserts, â&#x20AC;&#x153;Heâ&#x20AC;&#x2122;s just amazing. Iâ&#x20AC;&#x2122;m so lucky to have him. He accompanies me and Betty Buckley. He has his own show in Provincetown every weekend, he has two satellite radio shows, heâ&#x20AC;&#x2122;s written two books, and just recently wrote a musical.â&#x20AC;? Martinâ&#x20AC;&#x2122;s show is also new and the show at Bay Street will be the American premiere. From here, it will travel around the U.S. and Canada, so the Bay Street audience will have gotten the first glimpse of a new hit from Andrea Martin. Final Days! Everything Must Go!! with Andrea Martin at Bay Street Theatre, Sag Harbor on August 29. Showtime is 8 pm. Tickets are $60 for members and $65 for nonmembers. To purchase tickets go to www. baystreet.org or call the Bay Street Box Office at 631-725-9500. Or visit them on the Long Wharf, Sag Harbor.

ABOVE CALL SECURITY INC. We offer all phases of security including home surveillance, special events, executive protection, private investigations, commercial and retail security. There is no job too big or too small for us to handle.