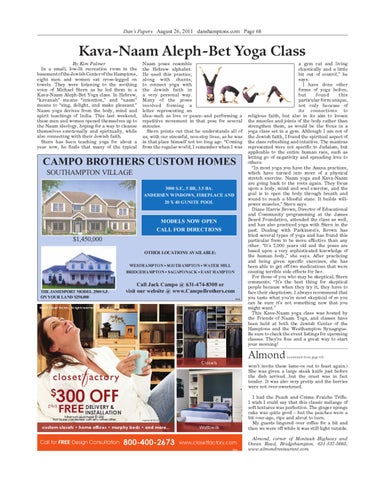 Kava-Naam Aleph-Bet Yoga Class By Kim Palmer In a small, low-lit recreation room in the basement of the Jewish Center of the Hamptons, eight men and women sat cross-legged on towels. They were listening to the soothing voice of Michael Stern as he led them in a Kava-Naam Aleph-Bet Yoga class. In Hebrew, “kavanah” means “intention,” and “naam” means to “sing, delight, and make pleasant.” Naam yoga derives from the body, mind and spirit teachings of India. This last weekend, these men and women opened themselves up to the Naam ideology, hoping for a way to cleanse themselves emotionally and spiritually, while also connecting with their Jewish faith. Stern has been teaching yoga for about a year now, he finds that many of the typical

Naam poses resemble the Hebrew alphabet. He used this practice, along with chants, to connect yoga with the Jewish faith in a very personal way. Many of the poses involved forming a letter representing an idea–such as love or peace–and performing a repetitive movement in that pose for several minutes. Stern points out that he understands all of us, with our stressful, non-stop lives, as he was in that place himself not too long ago. “Coming from the regular world, I remember when I was

I had the Peach and Crème Fraiche Trifle. I wish I could say that this classic mélange of soft textures was perfection. The ginger sponge cake was quite good – but the peaches were a bit over-age, ripe and about to turn. My guests lingered over coffee for a bit and then we were off while it was still light outside.

Minimum purchase $1500. Not to be combined with any other offer.

won’t invite these lame-os out to feast again.) She was given a large steak knife just before the dish arrived...but the crust was in fact tender. It was also very pretty and the berries were not over-sweetened.

a gym rat and living chaotically and a little bit out of control,” he says. I have done other forms of yoga before, but found this particular form unique, not only because of its connections to religious faith, but also in its aim to loosen the muscles and joints of the body rather than strengthen them, as would be the focus in a yoga class set in a gym. Although I am not of the Jewish faith, I found the spiritual aspect of the class refreshing and intuitive. The mantras represented were not specific to Judaism, but applicable to the entire human race, such as letting go of negativity and spreading love to others.   “In most yoga you have the Asana practices, which have turned into more of a physical stretch exercise. Naam yoga and Kava-Naam are going back to the roots again. They focus upon a body, mind and soul exercise, and the goal is to open the body through breath and sound to reach a blissful state. It builds willpower muscles,” Stern says. Diane Harris Brown, Director of Educational and Community programming at the James Beard Foundation, attended the class as well, and has also practiced yoga with Stern in the past. Dealing with Parkinson’s, Brown has tried several types of yoga and has found this particular form to be more effective than any other. “It’s 7,000 years old and the poses are based upon a very sophisticated knowledge of the human body,” she says. After practicing and being given specific exercises, she has been able to get off two medications that were causing terrible side effects for her. For those of you who may be skeptical, Stern comments, “It’s the best thing for skeptical people because when they try it, they have to face their skepticism. I always recommend that you taste what you’re most skeptical of so you can be sure it’s not something new that you might want.” This Kava-Naam yoga class was hosted by the Friends of Naam Yoga, and classes have been held at both the Jewish Center of the Hamptons and the Westhampton Synagogue. Be sure to check the event listings for upcoming classes. They’re free and a great way to start your morning!